Neutron scattering for the characterisation of magnetic fluids for anticancer treatment

Cancer remains one of the most widespread diseases and leading cause of death worldwide, despite a certain progress in diagnosis and treatment methods in recent years. Over the past decade researchers have been investigating the use of colloidal nanoparticles to act as delivery systems for targeted cancer drugs. The nanoparticles, with radii between 1 and 10 nm, can be coated with chemically active substances aimed at specific types of cancer cells. Magnetic nanoparticles, in particular, have properties that make them good candidates for applications in biomedicine. The transport and concentration of these particles can be controlled by the application of a magnetic field, thus increasing the efficiency of the treatment, and avoiding the spread of the nanoparticles in healthy tissues in the organism.

However, there are a number of problems associated with the use of nanoparticles for drug delivery. The particles must be designed so that they do not aggregate inside the body, as this could reduce their therapeutic efficiency. Aggregation can also cause blood clots, or hinder the removal of the nanoparticles from the body. Another potential complication is the premature reaction of the immune system, which can eliminate nanoparticles and thus impair their action on cancer cells. To avoid these problems, the particles must be coated with special biocompatible coatings.

The group of Prof. Peter Kopcansky, from the Institute of Experimental Physics of the Slovak Academy of Sciences, is looking for the ideal compounds and conditions to obtain aqueous suspensions of magnetic nanoparticles, so that they can be coated with drugs and biocompatible components but remain in a stable, non-aggregated state. Small-angle neutron scattering (SANS) is sensitive to aggregates in such ‘magnetic fluids’ and allows to determine the structure of such aggregates. Kopcansky et al. carried out small-angle neutron scattering (SANS) experiments at the Helmholtz Zentrum Gesthaacht, thanks to funding by NMI3, to study the coating of magnetite nanoparticles with polyethyleneglycol (PEG), one of the most promising biocompatible polymers. An important feature of PEG is that its presence in the particle structure delays the response of the reticuloendothelial system, which is a part of the immune system, and increases the lifetime of magnetic nanoparticles in the bloodstream from minutes to hours or even days. In addition, the polymer readily adsorbs some of the main anticancer drugs. However, the introduction of PEG into the structure of a magnetic fluid can drastically affect its stability.

Avdeev Figure 1. Change in SANS curves for various content of heavy water (D2O) in solvent after the PEG/magnetite mass ratio is increased from 1/1 (left graph) to 2.5/1 (right graph) in magnetic fluid. The volume fractions of magnetite in the studied systems are 1.7 and 0.54 %, respectively.

PEG was incorporated into the stabilising shell of magnetite (Fe3O4) nanoparticles in a water-based magnetic fluid. To perform SANS contrast variation the solution was diluted with different mixtures of heavy and light water. Based on the different scattering properties of hydrogen and deuterium, our SANS experiments allowed us to see that the structure of the modified fluid depends on the concentration of PEG. The addition of large amounts of PEG with a molar mass of Mw = 1000 g/mol results in the development of branched aggregates (fractal dimension of about 2.5) with a final size above 100 nm (see Figure 1). It is accompanied by a significant decrease in the volume fraction of dispersed magnetite in the system.

A small change in the effective match point, where the scattering intensity reaches its minimum as a function of the content of deuterated component in the solvent, indicates that PEG is adsorbed in its plain configuration on the magnetite surface. This slightly affects the thickness of the stabilizing shell. 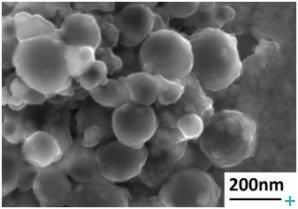 As Prof. Kopcansky explains: “Neutron scattering is a unique tool, which allows us to follow in detail the structural changes at the nanolevel after the polymer is incorporated in the system and finally helps to choose those optimal compositions and conditions, when the aggregation instability is minimal”.

In addition, interdisciplinary SANS experiments on this and similar magnetic fluids have been carried out in collaboration with chemists, physicists and biologists from Slovakia, Germany, Hungary, Switzerland, Ukraine and Russia. Among recent achievements of this group is the synthesis of the magnetic fluid with polyethyleneglycol coating containing the drug Taxol® (see Figure 2). The new fluid was successfully probed in in-vitro tests. The next step, the introduction in living organisms with cancer tumors, is in progress.