Where and how do plant roots take up water?

Have you ever eaten lupins? They are a common snack in Mediterranean countries. Thanks to NMI3 funding, scientists from the Georg August University of Göttingen in Germany have investigated where and how the roots of these plants take water from the soil. 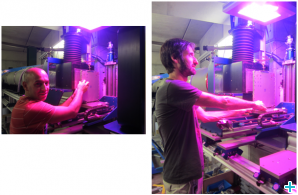 Experiments at the imaging station. Picture courtesy of the authors.

Root water uptake is a dynamic process that involves complex interactions among atmosphere, plants and soil. Despite its importance in plant and soil sciences, there is little knowledge on the location and way water flows along plant roots. To answer this question, a group of researchers have measured in situ the local flow of water into roots of lupin plants. By using neutron radiography at the Paul Scherrer Institute (PSI), they could trace the transport of deuterated water (D2O) in the roots of the plants, which were grown in aluminium containers filled with sandy soil. The transport of water into the roots was then quantified using a convection–diffusion model of D2O transport into roots. 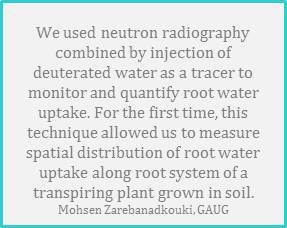 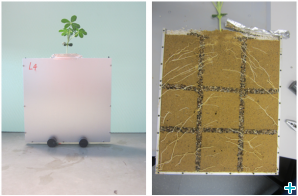 Plants in aluminum containers during the growth period Neutron radiography (left) and open sample after the experiment (right).

Plants in aluminum containers during the growth period. Neutron radiography (left) and open sample after the experiment (right). Picture courtesy of the authors.

The results showed that water uptake was not uniform along the roots. The roots, mainly the lateral ones, took more water from the upper soil layers than from the lower ones. The function of the taproot (the plant main root) was to collect water from laterals and transport it to the shoot. According to the authors, lupin root architecture is well designed to take up water from deep soil layers.

These results provided important information with regards to where and how plant roots take up water. However the model of D2O transport in soil and roots used in this experiment needs to be investigated further before being applied to other plant species. The authors suggest to test the model with plants with a dominant cell-to-cell pathway, so that we can better understand this process.

M. Zarebanadkouki, Y. X. Kim and A. Carminati Where do roots take up water? Neutron radiography of water flow into the roots of transpiring plants growing in soil, New Phytologist, 199(4), 1034–1044, 2013

Andrea Carminati from the Helmholtz-Zentrum fuer Umweltforschung GmbH – UFZ in Leipzig, Germany, (currently at the Univ. of Göttingen) received NMI3 support to perform experiments at PSI in Villigen, Switzerland, through our Access Programme.