NMI3 collaboration works on simulations to find the best possible guide for experiments at low temperatures and high magnetic fields. 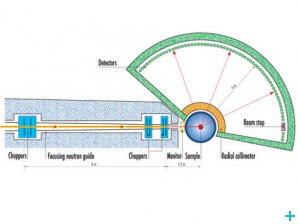 IN5 Layout of the IN5 spectrometer at the ILL.

Layout of the IN5 spectrometer at the ILL.

The focusing of neutrons is important for many neutron scattering studies, particularly when samples are available in small volumes. One of the aims of the NMI3 Joint Research Activity (JRA) on Advanced Methods and Techniques is to design and build a split, multi-channel neutron focusing guide that begins focusing outside a cryomagnet and completes the focusing optic within the extreme sample environment apparatus. This guide has two physically separate sections and together with a cryomagnet will be used to expose samples to low temperatures and high magnetic fields.

To evaluate the performance of two possible guide designs the team conducted Monte-Carlo simulations coupled with optimisation algorithms. The three algorithms used to assess the guide’s performance were artificial bee colony (ABC), differential evolution (DE), and particle-swarm optimisation (PSO). These algorithms are population-based, which evolve over time towards the best solution for a certain design scenario. In this case, a good performance means that a higher number of neutrons reached the sample at the end of the focusing guide. A particular curiosity is that these algorithms are inspired by nature, such as by the behaviour of social animals like the flocking of birds, and can exhibit superior performance for neutronic optimisation problems compared to traditional algorithms. The optimisation methods were compared with each other for two different guide designs at the IN5 spectrometer at the Institute Laue-Langevin (ILL).

The results of the initial optimisation study were very satisfactory. This design is capable of extreme vertical focusing elements crossing into a sample environment system. Neutron scattering experiments in extreme conditions will soon beneficiate from using these guides!

This work was supported by the NMI3 Joint Research Activity on Advanced Methods and Techniques.

NMI3 thanks Douglas Di Julio for reviewing this article.