The Detectors JRA at the Budapest Neutron Centre

As part of the NMI3-II Detectors JRA, scientists at the BNC explore alternatives to 3He so that neutron detectors can become more efficient and provide better data.

Detector technologies are fundamental for the proper function of the world’s neutron scattering facilities. For many years, helium-3 (3He) was the essential isotope used in a large fraction of detectors to allow the detector to respond to neutrons. However, due to US homeland security requirements, since 2008 there is a shortage of this isotope and its price became unsustainable. Researchers from a number of European facilities have teamed up in the NMI3-II Detectors Joint Research Activity (JRA) to explore alternative technologies to replace 3He. A group at the Budapest Neutron Centre (BNC) is part of this JRA. NMI3 visited them to learn about their task on the Development of gas detectors based on solid 10B converter.

The Detectors JRA at the BNC 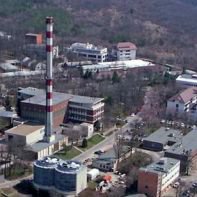 The BNC is an ideal place for this investigation as it provides test beam facilities and adequate equipment to analyse detector performances. János Füzi, who coordinates this task in Budapest, is Head of the Neutron Spectroscopy Department at the Wigner Research Centre for Physics. Within this NMI3 task, he works closely with his colleagues Laszlo Cser, a retired scientist who contributes with valuable expertise and advice, and Janos Orbán, a PhD student in electronics. Regarding collaboration within the Detectors JRA, scientists from the BNC often meet colleagues from the Helmholtz-Zentrum Berlin (HZB) to work together and exchange ideas and experiences.

There are currently three main directions of research to explore alternatives for 3He. One of them, the use of scintillators, is part of the task at ISIS, Jülich Centre for Neutron Science and Centro Nazionale di Ricerca. The group at BNC, together with the HZB, FRM II and Laboratoire Léon Brillouin, is involved in two other alternative directions. The first direction investigates the potential use of BF3. Currently, even though it can replace 3He, BF3 is not as efficient because it cannot reach sufficient pressure, which would cause the necessary wattage to be prohibitively high on various surfaces. The second alternative would be to use neutron absorbing coatings that only amplify the signal of particles that escape through very thin surfaces, but this method is not sufficiently efficient. The group involved in this task of the Detectors JRA at BNC is conducting experiments to improve the efficiency of neutron detection by exploring these alternative technologies. 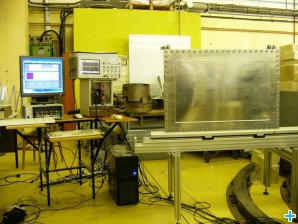 Janos Orbán’s PhD thesis is an important contribution to this JRA. During detection, neutrons are absorbed and produce charged particles that produce signals that will later be detected. These signals are then processed by detectors in order to obtain information about the absorption event. Finally, the data is collected and stored, which makes it possible to know the moment when the neutron entered the detector and the respective position. However, a number of problems might occur during the stage of signal processing. For instance, to obtain the necessary information in the case of wired detectors with delay line position encoding, five different signals need to be detected (an anode and four catodes). If one of the signals is lost, there will be no results. Also, at times a second event occurs while the signal of the first event is still being processed, which causes a false catode signal, the so-called pile-up handling. Janos O. is working on these two issues to improve the efficiency of signal processing and data acquisition.

Advantages of working as part of a NMI3 project

According to the group at BNC, taking part of a NMI3 JRA is important, as it has been proved by the successful results obtained through the project’s various periods of funding (European Commission’s Framework-Programmes FP5, FP6 and FP7). In fact, the group had previously taken part of former Detectors and Neutron Optics JRAs.

Furthermore, the NMI3 fosters communication and collaboration among a larger pool of experts, which definitely prompts new research ideas and provides useful feedback. For instance, not only are there regular meetings with other JRA members, but it is also possible to attend meetings of JRA’s on other fields of research to have a broader look of the work conducted in other neutron scattering facilities.

It is fundamental to improve the capacity of high performance detectors in order to provide better facilities to the user community, and the group at BNC is motivated to contribute to these developments.

Within this collaboration, as it generally happens in the scientific world, unforeseen results can be obtained and new research ideas may rise. For the participants of this JRA task it is reassuring that the goals previously set can be achieved. Thanks to this work, neutron detectors will be enhanced and neutron scientists will hopefully obtain better data.

NMI3 thanks János Füzi for reviewing this article.