Task 1: Development of scintillation detectors based on WLS fibre

Wavelength-shifting fibre scintillation detectors shall be developed as an alternative to 3He-detectors. In these detectors light from ZnS/6LiF scintillator will be captured in wavelength shifting fibres and converted to electronic signals by photomultiplier tubes, PMTs. The output signals from these tubes will then be electronically processed to determine where on the detector an event took place and whether or not the event was a neutron.

Within this task special emphasis will be given to reduce the gamma-sensitivity and intrinsic background of such detectors. It is these characteristics in particular which will determine how successful these detectors can be in replacing 3He detector technology for neutron scattering applications. Scalability will be a prime consideration facilitating construction of large area detector arrays based on this technology.

ISIS and JCNS will concentrate on the development of systems using vacuum PMTs. In parallel CNR will explore options for reading out large area scintillation detectors using SiPMTS. These are relatively new devices, still in the development phase and have some performance issues in neutron detector applications. Nevertheless, these devices are very compact, run at low voltages and high magnetic fields and are easily integrated into signal processing electronics.

In the future the possibility of low cost production and improved signal to noise could enable these devices to make a significant impact on the cost and performance of large area scintillation detectors for neutron scattering applications. This work will benefit from the SiPMT work done in the muon JRA in NMI3-I.

Task 2: Development of gas detectors based on solid 10B converter 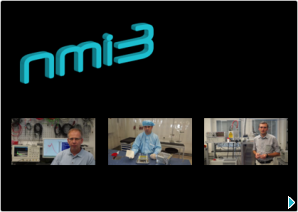 Watch the HZB detectors team explain their contribution to this JRA!

One of the major challenges in developing such detectors is the need to deposit uniform 10B layers of ~1 μm thickness over large areas. Because of the rather low efficiency of a single layer, up to 30 layers are necessary to achieve 50% absorption efficiency for thermal neutrons.

Once a suitable deposition method has been determined two detector design concepts will be pursued. One will be based on extruded tubes equipped with micro-structured profiles as the neutron converter. The other will be based on a stacked micromegas structure equipped with multiple conversion layers and corresponding amplification areas. The micromegas detector will benefit from the large amount of work already done at IRFU. The development of large-area thermal neutron detectors using 10B as an alternative to 3He is also being proposed in the ESFRI INFRA-Cluster project, 2010 call, by the ILL and ESS. 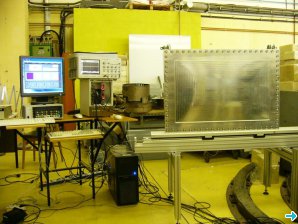 János Füzi told us about the BNC contribution to this JRA.

The emphasis in the NMI3 detector JRA will be to develop 10B detectors using Electron beam evaporation whereas the INFRA-Cluster project will concentrate on sputtering techniques. Other non-sputtering techniques may be explored in both projects. The detector constructions in the two projects are also fundamentally different.

The ESFRI 10B detector task leader Bruno Guerard, from the ILL, and the ESS Detector Group Leader Richard Hal-Wilton will participate as observers in the NMI3 detector JRA. This will ensure that work in the two tasks is not duplicated and an effective synergy between the two is achieved.