The NMI3 General Assembly in Zaragoza

The collaboration between facilities is proving fruitful

Participants at the NMI3 General Assembly in Zaragoza.

This year the NMI3 General Assembly took place on September 25th in Zaragoza, Spain. The Institute of Materials Science of Aragon (ICMA) has hosted 50 project members who met to learn about the work developed by their colleagues of other work packages (WPs), as well as the future plans for NMI3. 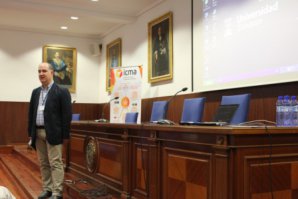 Javier Campo, the director of ICMA, welcomed everyone to the University of Zaragoza and told us the interesting history and impact that both the institute and the university represent in the Spanish research picture. His welcome address was followed by an introduction speech by the NMI3 coordinator.

Mark Johnson introduced the general assembly by reminding us of the steps taken so far, the meetings held to get the project running, and the future steps in the 16 months we have ahead of us until the end of NMI3-II. Some emphasis was given to the mid-term review by the European Commission, where Caterina Petrillo (CNR, Italy) and Sebastian Jester (EC) have praised the project for its activities and achievements, and advised on points that could be refocused to increase the impact of the project. Regarding the post-NMI3 plans, Mark informed about the structure, aims, and important dates of the project SINE2020 (Science and Innovation with Neutrons in Europe in 2020), which was submitted to the EC’s H2020 Programme and to which many NMI3 members contributed. 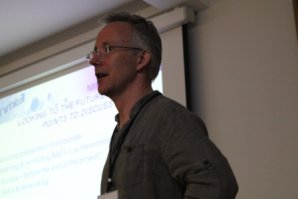 Given that the dissemination activities are a window to the project, Mark encouraged everyone to send highlights from the facilities to Inês Crespo so that NMI3 can be promoted further. The NMI3 website counts with over 3000 visitors each month where videos and highlights about the projects activities are posted frequently, and sent out once a month to subscribers through an e-newsletter. The project is also promoted through a range of relevant online social media and the EC news service, which have successfully contributed to give visibility to the NMI3 activities at an international level. 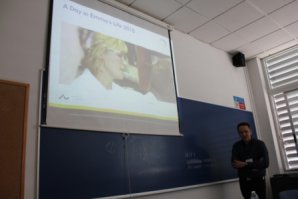 Mikkel Godsk at the NaMES meeting.

To finalise his speech, Mark reported on the NaMES meeting (Neutron and Muon European Schools) that took place the previous day. The school directors meet once a year to share experiences and best practices so that EU neutron and muon users can be trained in the best possible way. The schools are complementary and take place across Europe along the year. Within the NMI3 Education activities, NaMES can collaborate with the e-learning WP by providing educational material for the new platform. In fact, in the NaMES meeting Mikkel Godsk from the Aarhus University gave a talk on efficient learning design, which gave some insights on the benefits of intertwining teaching and technology. 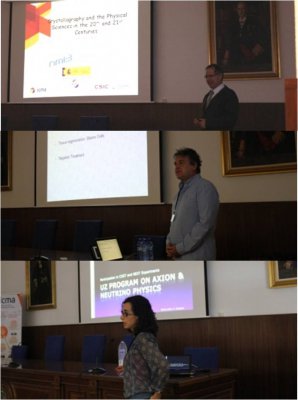 To have a look from and to outside the project, we had three scientists from the University of Zaragoza, who are external to the project, to talk about their work on crystallography, nano-biomaterials research, and detectors.

Larry Falvello gave a very interesting talk on crystallography and the physical sciences in the 20th and 21st century. To provide a general background he mentioned some relevant numbers and gave an overview of important structure discoveries and analysis in inorganic chemistry. After exposing the available data-bases he inferred on what the future might hold, and showed a few closing images.

Angel Millán presented us with new trends in nano-biomaterials research. He show-cased the numerous applications of nano-materials for research and the daily life.

Gloria Luzón presented the work of the university detectors group as well as the projects they are involved in. This was an opportunity to reflect on possible synergies with the NMI3 members. 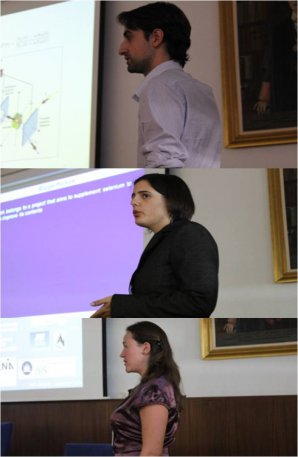 After the coffee break, Julian Oberdisse, who is a member of the NMI3 Advisory Committee and works at the University of Montpellier, has chaired the session dedicated to scientific highlights from the facilities, which were supported through the NMI3 Access Programme .

His talk was followed by a presentation by Catarina Galinha who conducted neutron experiments at the Nuclear Physics Institute of the ASCR to determine the concentration of selenium in wheat grown under a soil-supplementation regime, so that the Portuguese intake of the nutrient can be increased.

The third presentation in this session was given by Diana Lucía Quintero Castro who performed neutron scattering experiments at the Paul Scherrer Institute to investigate the line-shape of the singlet-triplet excitations in the dimer system Sr3Cr2O8 to first order in the high-density 1/z expansion.

The Joint Research Activities session was chaired by Don Paul from the University of Warwick and member of the NMI3 Advisory Committee. Victor Laliena from ICMA presented the status of the Advanced Methods and Techniques JRA . This JRA is exploring novel techniques to introduce conceptually new instrumental set-ups and developing a prototype to pave the road for implementation on user instruments with a particular emphasis on the characteristics of the future European Spallation Source (ESS).

Eberhard Lehmann from PSI presented the latest results of the Imaging JRA . Neutron imaging recently gained a high importance in material sciences and fundamental research and this JRA is contributing significantly to the field.

Steve Cottrell from ISIS has given an update on the activities of the Muon JRA . Muon spectroscopy is a powerful way of studying atomic level properties of matter, often producing complementary results to neutron scattering. This JRA is developing technologies and techniques which extend the range of capabilities of the muon method available to European users at PSI and ISIS.

Annie Brûlet from the Laboratoire Léon Brillouin (LLB) is the coordinator of the Advanced Neutron Tools for Soft and Bio-Materials JRA . She presented how this JRA is developing a platform for model biological membranes, soft-material-specific sample environments and in-situ devices, and providing a wider range of experimental tools enabling to make the best use of neutron scattering for soft and bio-materials, which have many possible applications in the areas of environment, energy and health.

Unfortunately Nigel Rhodes from ISIS, and coordinator of the Detectors JRA , could not attend the meeting but he did prepare a video presentation where he explained the latest achievements within this JRA. This JRA is developing two promising detector technologies which could alleviate the dire situation now facing the facilities as a result of the high cost and near unavailability of 3He. 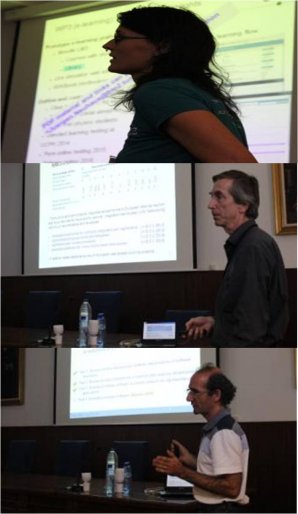 Jürgen Neuhaus from the FRM II is the coordinator of the NMI3 Networking Activities who chaired this session.

Linda Ubdy, from the Niels Bohr Institute in Copenhagen, presented the status of the Virtual Neutrons for Teaching , the e-learning platform she is coordinating. She encouraged all NMI3 members to provide teaching material on neutron scattering so that future users can learn as well as possible once the platform goes live, within the next year. Have you got relevant PDF materials and links that can go directly to the library? Please send them to Jürgen Neuhaus.

Thomas Gutberlet, from the Helmholtz-Zentrum Berlin, is the coordinator of the WP on Integrated User Access . This WP aims to structure and harmonise an integrated access format to European national neutron and muon facilities, to make it easier to scientific users to submit their proposals across facilities.

The last presentation was given by Emmanuel Farhi, from the ILL, who coordinates the Data Analysis Standards WP. A total of nine scientific computing groups contribute to this networking activity which aims to evaluate and facilitate common development in reduction/analysis for neutrons and muons. The group has already reviewed existing data analysis software and existing similar initiatives, and is currently evaluating the prototype software developed.

All participants were glad to learn about the latest developments within the project at the NMI3 General Assembly. The collaboration between facilities is proving fruitful and WPs can actually benefit from the achievements of other WPs. We were glad to note that most tasks in all the JRAs were delivered on time and the remaining ones are successfully ongoing. And of course that in the evenings the networking continued over tapas and dinner in the beautiful Zaragoza city centre. Good collaboration will continue for the next 16 months!