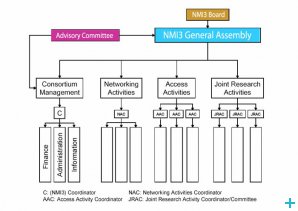 NMI3 Diagram showing the structure of the consortium governance

The central body of NMI3 is its General Assembly , which represents the main players in neutron scattering and muon spectroscopy research in Europe, and some observers from other continents. In an attempt to integrate end users, rather than just the larger facilities and labs, user organisations (associations) are also represented in the general Assembly.

The decision-making process within NMI3 relies on consensus within the General Assembly and when such consensus cannot be reached decisions are taken to the NMI3 board.

The NMI3 Board consists of one representative from each of the organisations represented in the NMI3 General Assembly, apart from non-European observer institutions.

The NMI3 Coordinator, Board and General Assemblies are advised by a Scientific Advisory Committee.

In addition to the ´member´facilities providing Access, both the multi-national Institut Laue Langevin and the European Spallation source are also members of the governing bodies of NMI3.

The NMI3 management meets regularly. For a calendar of meetings please consult our general calendar here.