What can be studied with Muons?

Muons can be used to explore a very diverse range of materials. Their applications broadly fall into two categories: using muons as probe particles to explore atomic level behaviour, and using muons as light protons to understand how hydrogen behaves in a material.

In the first case, muons can be used to explore a wide variety of magnetic and superconducting systems, and the muon can be thought of as acting like a very sensitive microscopic magnetometer. They can also be used to investigate molecular dynamics, together with charge transport phenomena such as polaron motion in conducting polymers, electron transport and ion conduction.

Muon Spin Rotation and Relaxation are mostly performed with positive muons. They are well suited to the study of magnetic fields at the atomic scale inside matter, such as those produced by various kinds of magnetism and/or superconductivity encountered in compounds occurring in nature or artificially produced by modern material science.

The London penetration depth is one of the most important parameters characterising a superconductor because its inverse square provides a measure of the density ns of Cooper pairs. The dependence of ns on temperature and magnetic field directly indicates the symmetry of the superconducting gap. Muon spin spectroscopy provides a way to measure the penetration depth, and so has been used to study high-temperature cuprate superconductors since their discovery in 1986.

Other important fields of application of µSR exploit the fact that positive muons capture electrons to form muonium atoms which behave chemically as light isotopes of the hydrogen atom. This allows investigation of the largest known “isotope effect” in some of the simplest types of chemical reactions, as well as the early stages of formation of radicals in organic chemicals. Muonium is also studied as an analogue of hydrogen in semiconductors, where hydrogen is one of the most ubiquitous impurities and can affect the material’s electronic properties.

How do muons compare with other techniques? 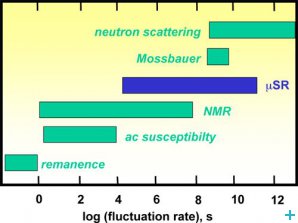 Muons are particularly good for investigations where magnetism is weak or dilute – they are a very sensitive probe! For the case of superconductors, as well as being able to explore atomic-level magnetism associated with superconductivity, muons provide an important probe of flux lattice behaviour, and can give information complementary to small angle neutron scattering.

There are other reasons why muons may be the best technique to use for a given sample. For example, the muon method can be used in zero applied field, whereas NMR would require application of fields which may affect sample properties. In cases where the behaviour of the muon itself is of interest, such as when using muons as proton analogues to study hydrogen behaviour, undoped, intrinsic samples can be used.