The first General Assembly of NMI3-II took place on June 20-21 in Berlin. The project, funded under the second phase of funding of the European Commission 7th Framework Programme, already counts with 15 months of activity, so it was time to take stock of the work developed. 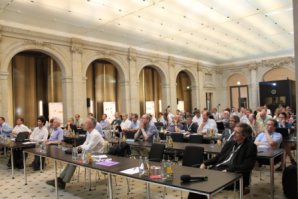 The local organiser, the Helmhotz-Zentrum Berlin (HZB), has welcomed the around 100 participants at the beautiful Berlin-Brandenburg Academy of Sciences and Humanities. Along with her welcoming words, she described HZB's activities and the role played by NMI3 in facilitating users' access to the facility.

On the first day, we had very interesting talks on the state-of-the-art of neutron scattering research. Mark Johnson, the NMI3's coordinator, introduced NMI3 through a brief history of the project, aims, and results obtained on its various fronts.

This General Assembly was special because on the first day we had the privilege of having facilities' directors sharing their experience. 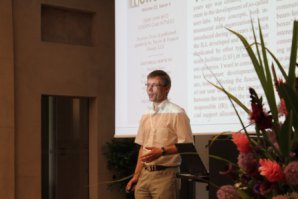 Joel Mesot at the NMI3 GA

Joel Mesot, director of the Paul Scherrer Institute (PSI), has shared his experience in working on a Large Scale Facility (LSF). Whereas much has changed since the 1970's, many things remain the same, as for instance the timing for proposal submissions. Mesot has stressed the importance of re-thinking the existing system in order to respond to changing research needs and therefore improving development and data. He encouraged the NMI3 members to reflect and take new steps on these issues. This talk fostered an interesting discussion among the audience with many sharing their own experience and giving valuable advice. 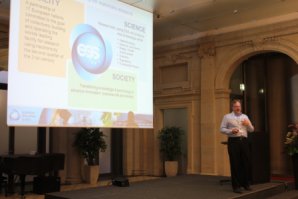 James Yeck at the NMI3 GA

Afterwards, James Yeck, director of the European Spalation Source (ESS), presented the plans for the next years and stressed that this year is decisive. Based in Sweden, the ESS is an international collaboration with partners contributing for 50% of the project. Yeck encouraged all facilities to get involved because ESS is open about the planning and is seeking engagement so as to respond to the users' needs as well as possible.

Neutron users' associations were also represented in the meeting. Tobias Unruh, from the German Neutron Science Committee, presented his own research results for which neutrons are fundamental. 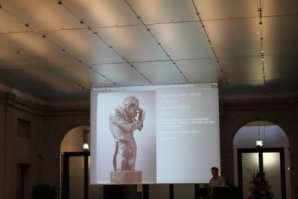 After a short break, seven users who performed neutron and muon experiments thanks to the NMI3 Access Programme have presented their results. Many of these were young researchers who could benefit from NMI3 support to produce very interesting results in fields such as arts, environment, health, magnetism, complex materials and hydrogen storage. These scientists stressed the importance of having the opportunity of performing experiments in different European facilities so that they can have access to the best possible data. 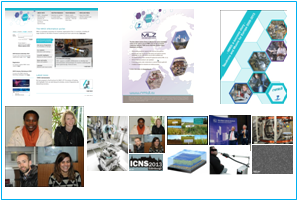 The second day of the General Assembly was dedicated to the NMI3 internal activities. Juergen Neuhaus chaired the session on Networking Activities. In the first talk, Inês Crespo told the group about the different channels used to communicate the project's results and how the facilities' scientific results can be successfully disseminated. This was also the perfect opportunity to present the recently created e-newsletter and announce the publication of the NMI3-I final brochure. 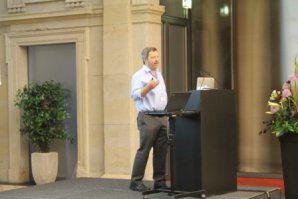 Ross Stewart at the NMI3 GA in Berlin

Ross Stewart is the coordinator of the Neutron and Muon European Schools. In his presentation, he explained that the goal of creating this umbrella is to provide students with information of the schools available, focus and calendar so that they can take better informed decisions when selecting which school to attend. Ross explained how the school directors share experiences to improve their schools and the issues identified by the Advisory Committee to address in the future. 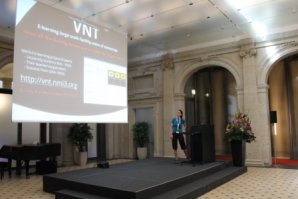 Linda Udby at the NMI3 GA

Linda Udby from the Niels Bohr Institute of the University of Copenhagen coordinates the forthcoming e-learning platform. In her talk, she explained the steps taken to develop this Virtual Neutrons for Teaching platform so that university students and others can learn about neutron scattering. This great initiative will broaden access to education to the ones who are not able to pay university fees. The platform will be developed over the next years and will comprise a lesson area, a wiki area, exercises, quizzes, simulations and virtual experiments. 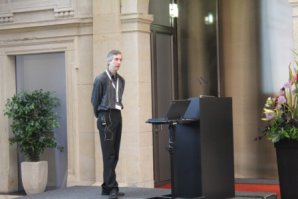 Thomas Gutberlet at the NMI3 GA in Berlin

A collaboration on Integrated User Access is working on an integrated platform that will make it easier for users to access European neutron and muon facilities. Thomas Gutberlet, the coordinator, has presented the outcome of a survey answered by about 260 users and told us how the facilities' user offices are evaluating the results in order to harmonise proposal forms, templates and optimisation of the submission of proposals' mechanism. 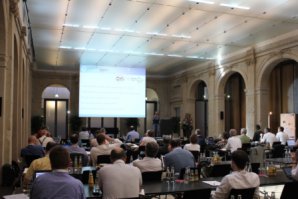 Emmanuel Farhi at the NMI3 GA in Berlin

Emmanuel Farhi from the Institut Laue-Languevin (ILL) is the coordinator of the collaboration on Data Analysis Standards. He explained us the work developed within this collaboration that aims to determine how to develop, deploy and operate a common data analysis software infrastructure to facilitate joint software development in the neutron scattering community. 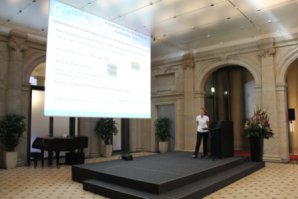 Annie Brulet at the NMI3 GA in Berlin

After a short break, it was time to learn about the latest results and developments achieved within the NMI3 Joint Research Activities (JRAs). These fruitful collaborations among facilities are improving science possibilities. Steve Cottrell from ISIS told us about the Muons JRA ; Nikolay Kardjilov from HZB presented the results of the Imaging JRA ; Eddy Lelievre-Berna from ILL, on behalf of Phil Bentley, briefed us on the developments within the Advanced Methods & Techniques JRA; Annie Brulet from the Laboratoire Léon Brillouin told us about the latest achievements of the Soft and Biomaterials JRA ; and finally Nigel Rhodes from ISIS explained the work made within the Detectors JRA. 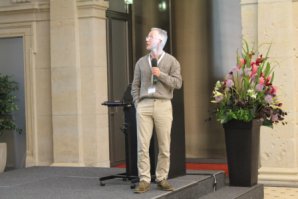 The meeting finished with the friendly words of Mark Johnson. After a review of some of the achievements of NMI3-II, he reminded everyone about important dates and deadlines related to the project's next reporting period. Special thanks were dedicated to the Advisory Committee and the local meeting organiser, HZB, for all the support provided to NMI3.

As Mark said, this was a successful General Assembly. I believe that everyone returned home satisfied with the productive discussions held, which is only possible by meeting our colleagues in person.