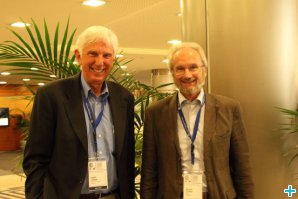 Gerry Lander and Michael Steiner After the award at ECNS 2011

On the 19th July 2011, during the 5th ECNS in Prague, Dr. Gerry Lander received the Walter Hälg Prize from the hands of ENSA chairman Michael Steiner.

The prize was awarded to Dr. Gerry Lander in recognition of his many ground breaking scientific achievements mostly in the field of the magnetism of the actinides, and his outstanding contributions to the development of neutron sources, in particular his scientific leadership making Intense Pulsed Neutron Source (IPNS) the basis for the spallation neutron sources to become the neutron sources of the future.

Dr. Lander obtained his Phd in Physics at Cambridge University and worked for 20 years at Argonne National Laboratory, where for the last 5 years (1981-1986) he was Director of the now closed Intense Pulsed Neutron Source. After that he went to ITU and spent 16 years there doing science before he again fell into administration.

Founding Editor of Neutron News, he worked on the journal from 1989-2000. He has himself published over 400 scientific articles.