The EC in Brussels formally adopted its decision to establish the European Spallation Source as a European Research Infrastructure Consortium, or ERIC.

“The European Commission’s approval of ESS as an ERIC is a major milestone for the project,” says Jim Yeck, ESS Director General. “This decision establishes ESS as an international organisation with legal standing in all the Member Countries, and provides the framework for completing the project in collaboration with our partners in those countries.”

The European Spallation Source is the world’s next-generation neutron source currently under construction in Lund, Sweden. It is the largest project and one of the top priorities of the EC’s European Strategy Forum on Research Infrastructures (ESFRI) Roadmap, which was established over a decade ago to prioritise research infrastructure development in Europe. The EU has contributed €5 million of funding to the project’s Pre-Construction Phase, with additional support of €20 million in 2015 through Horizon 2020.

ESS will use a high-power linear proton accelerator to create neutron beams to probe the structures and dynamics of materials—everything from motors for industry, to emerging discoveries in nanotechnology and superconductors, to proteins and pharmaceuticals for medical applications. The facility will be a major driver for innovation in science and industry in Europe. 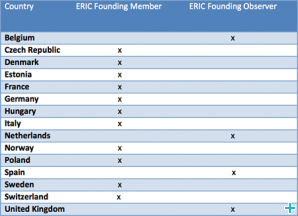 The EC’s decision to establish ESS as an ERIC heralds a new governance structure for ESS and its Partners that will include Founding and Observer Member Countries who are empowered to both govern and fund the project directly.

Originally established as a Swedish limited liability corporation owned by the Swedish and Danish governments, ESS AB will complete a transfer of assets, obligations and personnel to European Spallation Source ERIC on 1 October. Following that, the European Spallation Source ERIC Council, comprised of representatives from ESS Member Countries and will act as the sole governing body.

“The Host Countries Sweden and Denmark shepherded the large pan-European efforts of ESS first into construction a year ago and now into the ERIC organisation co-owned by a large set of European countries. They should be commended for their leadership,” says Prof. Börjesson. “Now we look ahead to future leadership by a fully committed group of ESS Member Countries who will bring ESS into operation over the next decade.”

The successful establishment of European Spallation Source ERIC will be celebrated at a ceremony in Lund on 8 September, where the EC’s Director-General for Research and Innovation, Robert-Jan Smits, will present a commemorative ERIC Plate to ESS. The ESS Council will next meet at the ESS construction site in mid-October.

The ESS is a member of the NMI3 Consortium.

New ENSA Brochure on “Neutrons for science and technology”

The brochure highlights the importance of neutron scattering, illustrated by several examples. Get a free copy at the NMI3 stand at ECNS! Read more.