Kurt Clausen is currently head of the Neutron and Muon Department at PSI. He was chairman of the first Neutron round tables and in this interview with Juliette Savin, he talks about NMI3 and the history of the integration of neutron and muon facilities in Europe. 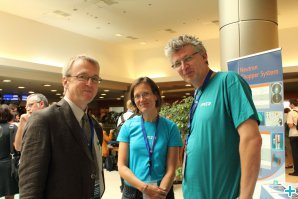 Juliette Savin: How did it all start? How did the idea of integrating neutron and muon facilities come about?

Kurt Clausen: Well, in the first EU Framework Programme, in the 1980´s, there were no large installations, such as neutron sources. It is only in FP2 that the first Large Installation Programme (LIP) was created – it was a pilot programme in which a few neutron facilities could benefit from EU funding and establish formal Europe-wide user programmes. DR3 at Risø was part of it. The pilot project was successful and in FP3, five neutron facilities were supported: DR3, BER-II Berlin, Siloe Grenoble, ISIS, and LLB.

Marco Malacarne from the European Commission was in charge the Large Installation Programme, and he is the one who first had the idea of bringing together facility directors. Charles de Novion from Saclay (LLB), France chaired these meetings. This was another success and we embarked on another neutron-led Pilot project in FP4: the neutron and muon round table. In FP4, Siloe had shut down but NFL Studsvik and the Muon facilities at ISIS joined the programme. I had the honour of chairing the round table in both FP4 and FP5.

We must have done reasonably well, as round tables were generally introduced by the European Commission (EC) in the FP5 Access Programmes. In FP5, Jülich and Budapest joined the programme and collaborations with PSI neutrons and muons were initiated through bilateral agreements.

Juliette Savin: What exactly were the Round Tables?

Kurt Clausen: They were formal meetings where representatives of the neutron facilities receiving EU funds and ILL could discuss the future of neutron sources. That´s where we started to discuss ESS for example! We even created a website where we documented everything we did for ESS, until the ESS Steering committee decided to stop the ESS project in February 2003. Ana Claver made this ESS website for us and it was the basis for the NMI3 website.

We also communally organised conferences, workshops, schools and things like that.

The neutron community was well coordinated, the EC recognised that and thought we should go a step further and the idea for I3s came about. The idea was to have one contract for all facilities, instead of individual contracts – and thereby have the possibility to be more flexible.

Juliette Savin: Do you think NMI3 has been successful?

Kurt Clausen: Maybe I am a bit biased, but I consider the Access Programme one of the most successful EU programmes, a truly trans-national European programme and extremely good value for money. The European neutron sources are coordinated and collaborating in a way that is not seen anywhere else. We are leading the field in this area. In terms of bringing Europe together as one big market for neutron scattering it has been a fantastic success, and the biggest danger we face now is this success! Because the EC believes that if something is successful then it has to be self-sustained.

The whole point with NMI3 is that you are supporting a group of users who would otherwise not be supported: you are supporting non-Swiss users in Switzerland, non-German users in Germany etc. If we didn´t do it like this then these users would each individually have to write a grant proposals. The amount of paper work and the inefficiency would be unbelievable. Now what you have is a very efficient system with peer-review of proposals, where if you have a good proposal, independently of where you are in Europe, you will get access to the best suited European facility. My point of view is, it´s probably the best programme the EU has ever created.