NMI3 – 10 years to support to the neutron and muon communities

The integration of European neutron facilities has a long history. Its hour of birth can be associated with the first Neutron Round Table under the European Union 3rd Framework Programme (FP3) in the early 1990´s. Under FP6, around ten years later, in 2002, the integration effort took on a different dimension, with the launch of NMI3 (Integrated Infrastructure Initiative for Neutron scattering and Muon spectroscopy). Ever since, NMI3 has been a main driver of European Research, and has contributed to nurturing excellence in European neutron scattering and muon spectroscopy. After a bumpy road at the beginning of FP7, NMI3 is now about to embark on a new voyage. With new funding from the EU, new partners on board, and new projects ahead, the next four years are looking bright!

The European Union supports research through ´Framework Programmes´, each normally lasting for five years. The Framework Programmes started in the 1980´s and have supported neutron and muon research across Europe ever since. Coordinated by Kurt Clausen, the first EU funded Neutron Transnational Access Programme ran at Risø in Denmark from 1991, with funding from FP2. By 1993, five other neutron and muon facilities were also offering EU funded access. ´Round tables´ were then created to bring together the major European facilities and integrate them through ´Networking activities´ such as meetings, conferences, workshops and schools. The Neutron round tables were coordinated by Charles de Novion in FP3 and Kurt Clausen in FP4 and FP5. They were particularly successful and inspired other similar integrating actions in other areas.

The I3s, or Integrated Infrastructure Initiatives, only appeared under FP6. Their aim was to combine, within a single contract, several activities essential to reinforce research infrastructures and to provide an integrated service at the European level. The I3s´ programme introduced a number of activities required of each consortium: networking activities (including consortium management); provision of access to transnational users; and joint research activities. The aim of the latter being to raise the level of performance of the concerned infrastructures.

NMI3, the Integrated Infrastructure Initiative for Neutron Scattering and Muon Spectroscopy was created under FP6 in 2002. Coordinated by Robert McGreevy , from ISIS, it was the second largest I3, with 21 million Euros funding. Transnational Access was NMI3´s main focus, allowing access to all of the European neutron and muon facilities except the Institut Laue Langevin (ILL). The first Access Programme was extremely successful, funding 1348 experiments and 1719 unique visitors, 43% of whom were first time users. Under FP6, there were 8 Joint Research Activities, which provided a much-needed funding, framework and timescale for successful collaborations in critical areas of neutron and muon research, such as instrument development, sample environment, detector development. Helmut Schober (ILL) coordinated the networking activities, which amounted to 36 workshops and supported the attendance of 409 participants to different neutron and muon schools. NMI3 also played a leading role in forming the I3 network, which brought together all the I3 projects. During FP6, the overall feeling was that they were beneficial to the scientific community, despite the hard work needed to set them up and maintain them.

The introduction of a funding ceiling of 10 million Euros applied to all I3s, during the FP7 call in 2009, was a real stress test for NMI3. In the new project, coordinated by Helmut Schober with the help of project manager Miriam Förster, and Networking manager Philip King (ISIS), the Access Programme had to be reduced considerably in scope. It was decided that the funds would be used over a period of two years only. Nevertheless, at the beginning of 2010, already 2635 beam days had been funded through the programme. All Networking and Joint Research Activities were downsized and many partners increased their own contributions to make the project viable despite the severe budget reductions. This clearly demonstrated the determination of the consortium to stand together to brave bad weather. 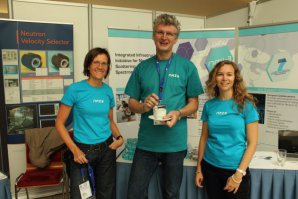 Fortunately for neutron and muon users the EU opened a second call within FP7. In recognition of the vast number and great diversity of its users, the neutron and muon community was entitled to bid for 15 million Euros, just like the synchrotron community. The submitted NMI3 follow-up proposal was successful and with these new funds NMI3 hopes to restore its activities to their original level, with some innovative changes.

In the upcoming project, which will run from February 2012 to 2016, NMI3 will concentrate on improving service to its users and stimulating the advancement of neutron and muon science. It will comprise 18 partner organisations, including 8 facilities and 12 countries.

NMI3´s Joint Research Activities focus on areas of strategic importance, with a large potential for innovation and immediate impact on the services provided to the users. Hence, the collaborations to be started next year will concentrate on advanced methods and techniques for new instrumental set-ups, structural and magnetic imaging at the micro and nano-scale, advanced neutron tools for soft and biomaterials, as well as neutron detectors and muon technologies.

Ensuring the training of new users has always been one of the consortium´s objectives. In the upcoming project renowned neutron schools will be supported under a common umbrella. The newly established European Neutron and Muon school will become a label of excellence in teaching as it will be seconded by e-learning modules on the NMI3 website´s education corner. Based on modern e-learning tools, the NMI3 education corner should in the long run become the number one support for teaching in neutron scattering and muon spectroscopy.

NMI3 has also decided to boost its communication activity. The newsletter Inside NMI3 , launched in July 2011 and published bi-annually, provides the community with updates on NMI3 projects, as well as scientific highlights and information about schools and events. The NMI3 website was relaunched in November 2011. With lots of exciting features and functionalities, like the interactive timeline and integrated map of facilities, the new website is the online hub for the neutron and muon community. It also provides clear information about neutrons and muons for scientists new to these fields, and its News and Media pages are the place to go for the latest neutron and muon news and highlights.