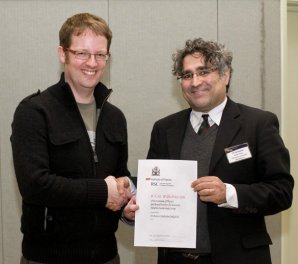 Dr Robert Dalgliesh from the ISIS Neutron and Muon Source has been awarded the prestigious BTM Willis Prize for neutron scattering. This is in recognition of his development of novel neutron techniques that are opening up new areas of fundamental and applied research in nanoscience.

The prize is awarded bi-annually by the Neutron Scattering Group of the Institute of Physics (IOP) and the Royal Society of Chemistry (RSC).

Dr Dalgliesh has built a new instrument called Offspec, one of instruments on the ISIS Second Target Station. It is designed to look at microscopic structures such as those found in polymer blends (plastics) and surfactants (soaps and detergents).

Researchers frequently use the well-established techniques of neutron reflectometry and small-angle scattering for studying samples at the nanoscale. However, both techniques have limitations; reflectometry is best suited to measuring nanometre structures perpendicular to a surface, and small-angle scattering is restricted to an upper size limit of a few hundred nanometres.

“Dr Dalgliesh’s work in building Offspec has been vital in addressing these limitations” said Dr Ali Zharkbash, Chair of the IOP/RSC Neutron Scattering Group. “By labeling neutron trajectories with spin-echo techniques, the Offspec instrument is now able to study structures across a surface and to access bigger particle sizes such as those found in the complex aggregate structures such as cheese, yoghurt and milk. Previous studies have shown that processing conditions and methods can change the structure of these products on the micron scale and this can alter taste, texture and shelf life.”

Aggregate structures in milk products such as cheese are of particular interest to researchers from the Netherlands, which contributed funding for the construction of Offspec.

Dr Robert Dalgliesh explained the importance of ISIS to the scientific community: “Neutron scattering enables us to get results we can’t get with any other technique. Using Offspec, it is now possible to look at the structure of surfaces, buried interfaces between materials and complex assemblies of molecules in a new way. The development of these new techniques will help to significantly increase our understanding of extremely challenging and technologically important types of material.”

“This is a great achievement by a talented young scientist,” said Dr Andrew Taylor, ISIS Director. “Offspec is already showing that it will revolutionise our ability to understand surface structure in both biological and physical systems.”

The first publication from Offspec confirmed a prediction dating back to Isaac Newton; that neutrons undergo a slight shift or 'slip' along a surface before reflection in exactly the same way as light. Upcoming experiments include investigation into phase separating polymer blends, liquid crystals and particulate dispersions.

The BTM Willis prize is sponsored by the Institute of Physics and the Royal Society of Chemistry. It is named after Professor Terry Willis, one of the pioneers of the use of neutron scattering in the United Kingdom.
—