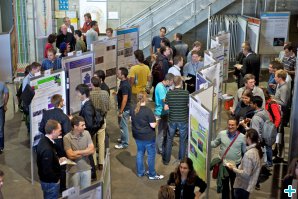 The first joint user meeting at PSI took place in 2009, when it was decided that a joint meeting, rather than individual user meetings for the three PSI facilities – SINQ, SLS and SμS – would be more beneficial to the PSI user community. The aim of this meeting is to bring together the three user communities and to generate new synergies among the scientists driven by common scientific rather than technical or methodical interests.

This decision turned out to be a good one, judging from the large turnout at the last edition of the meeting: more than 200 participants attended the PSI user meeting 2011, organised in collaboration with the PSI Joint Users' Association JUSAP.

The meeting kicked off with various invited talks presenting scientific highlights from the users, as well as recent information about the facilities. 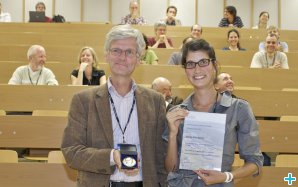 On the second day seven parallel topical workshops covered a large variety of the scientific topics addressed by the users of PSI.

In total, 81 oral presentations were given and two poster sessions hosted 76 poster contributions. One special highlight was the award of the second PSI Thesis Medal to Elena Mengotti for her recently finished thesis entitled The artificial kagome spin-ice system: from building blocks to emergent monopoles. The Thesis Medal is awarded every second year in the framework of the JUM@P meetings to an outstanding PhD thesis that contains substantial scientific results achieved at one or more of the large PSI user facilities, SLS, SINQ and SμS.

The organising committee would like to thank the PSI user community and all the staff at PSI, who made the user meeting 2011 a success.

More information about the user meeting is still available on the website. The next meeting of the JUM@P series is planned for 2013.