Mark Johnson, coordinator of NMI3-II, has been appointed new UK Associate Director of the Institut Laue-Langevin, with effect from 1 October 2016. He will act as Head of the Science Division. 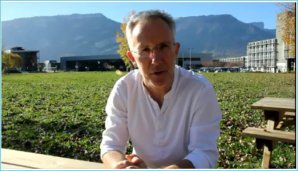 Mark Johnson at the ILL in Grenoble.

Prof. Johnson moved to Grenoble in 1993 as a Royal Society-funded post-doc at the University Joseph Fourier, where he developed high pressure, high resolution optical spectroscopy experiments. The restart of the ILL reactor in 1995 was an opportunity to join the ILL in the Time-Of-Flight group where he worked on the backscattering spectrometers, IN10 and IN16.

In 1999, Mark Johnson became Head of the Computing for Science group in the Science Division. The group has developed a coherent approach to data treatment across a wide range of instruments and deployed simulation methods to help optimise instrument performance and to provide atomistic models to give detailed insight into neutron scattering data. Since 2012, Prof. Johnson has led the European NMI3-II project, including the consortium's successful bid for further funding with the SINE2020 project in the Horizon 2020 Framework Programme.

Mark Johnson said: “The ILL has a critical role to play at a pivotal moment for European neutron scattering. The future European spallation source (ESS) has started construction; it will produce first neutrons around 2020 and a high level of scientific output by 2030. The scientific success of this 2 B€ infrastructure will however depend to a large extent on the strength of the European neutron scattering community, which is supported by the ILL and world-class national facilities. The announced closure of two of these facilities constitutes a ~20% loss in European capacity and therefore a major threat to the community. ILL must rapidly return to running at full capacity (4 cycles per year) and optimise scientific output for academic and industry-based users. I look forward to working with whole ILL team and our European partners to achieve these goals and maintain the ILL's world-leading role for many years to come.”

Prof Mark Johnson will take up his post when Prof Bill Stirling, the current UK Director of the ILL, comes to the end of his contract.