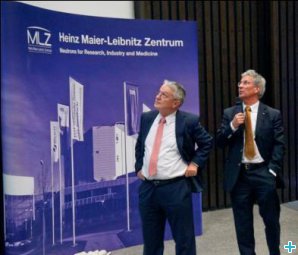 Prof. Dr. Richter and Prof. Dr. Petry at the inauguration of MLZ. Courtesy of FRM II

The center is named after the German pioneer and mentor of neutron research, Heinz Maier-Leibnitz (1911 – 2000). On his initiative and under his guidance, the first neutron research reactor (Forschungsreaktor Muenchen, FRM) in Garching, the “atomic egg”, was built and put into operation in 1957. Heinz Maier-Leibnitz was also founding director of the international high-flux reactor at the Institute Laue Langevin in Grenoble, France. Until his retirement in 1974, Heinz Maier-Leibnitz was professor of Technical Physics at TUM and director of the FRM. From 1974 to 1979 he was the president of the German Research Foundation (DFG).

The cooperation between TUM and the Helmholtz Centers started in 2011 and will receive support for ten years by the Federal Ministry of Education and Research (BMBF) with an annual budget of 19.8 Million Euros. Under the auspices of the Jülich Research Centre, the Helmholtz Centers are financially involved with 10.52 Million Euros per year. TUM is still the sole operator of the neutron source. The State of Bavaria funds reactor operation and research with 25 Million Euros annually.

The new centre, MLZ, supports both German and international scientists in their contributions towards solving major scientific and societal challenges, e.g. in the field of energy research, biomedicine, information technology, materials science and engineering. For this purpose, TUM and the Helmholtz Centers operate 30 first-class instruments at the MLZ. To merge the know-how and to further exploit synergies, joint scientific groups have been founded. They cover six important fields of neutron research: materials research, neutron methods, quantum phenomena, soft matter and biophysics, nuclear and particle physics, as well as structure research. Joint professorial appointments are also planned. The MLZ joint collaboration becomes the biggest instrument provider for NMI3’s Access Programme.

TUM’s President Prof. Wolfgang A. Herrmann said “Therewith, the Heinz Maier-Leibnitz Zentrum is a world-leading center for research with neutrons and positrons. Due to its unique range of applications TUM’s Research Neutron Source provides the essential basis for this.”

Prof. Dieter Richter, spokesman of the Scientific Directorate of the MLZ and Director of JCNS at the Jülich Research Centre said “By increasing the cooperation we create an academic environment that is internationally leading. This will strengthen the German research landscape on a long term basis.”

You can find more information on MLZ’s research activities and instruments on the new website www.mlz-garching.de.

(This article has been prepared with materials from FRM II.)