My tour of member facilities - Two days at PSI 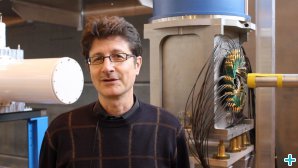 Elvezio Morenzoni, Head of the Laboratory for Muon-spin spectroscopy lab at PSI

My last facility visit, on the 27th and 28th February 2012, was at the Paul Scherrer Institute, in Switzerland. During my stay, Stefan Janssen who coordinates the User office at PSI took me around SINQ, the neutron facility, and I also visited SμS, the muon source, and the particle physics laboratory. I had no idea that scientists at PSI are conducting particle physics experiments aiming to better understand the fundamental structure of the universe. For example, on the MEG experiment, Stefan Ritt and his team are studying the decay of the muon, to find out which fraction of muons decays into a positron and a photon.

SINQ and SμS were not in operation when I was there, which meant that we could look at the instruments from close. The neutrons and muons used for experiments at PSI are produced by spallation. I learnt that PSI´s accelerator has been in operation since 1974 and now provides the most intense proton beam in the world.

The person I wanted to interview during my visit was Elvezio Morenzoni, who coordinates the Muons JRA at PSI. He showed me the SμS high field spectrometer and explained the work he and his team have been doing as part of the JRA. More on the Muon JRA page.

I also met the PSI Head of Communication, Dagmar Baroke, and Paul Piwnicki the PSI Science Writer. They kindly took me around the PSI Forum, a very well designed hands-on science centre located on the PSI campus. I could play with various exhibits about general topics such as global warming, or transports for the future, or learn about how to study magnetism using neutrons and muons. A also watched a very entertaining 3D video about neutrons and protons and witnessed first-hand the rain of muons the surface of the Earth is constantly bombarded with!

Another very good educational initiative at PSI is the iLab – a lab especially designed for young physics learners. The learners are typically high-school students, who come with their science teachers to do experiments on waves and vacuum.