Neutron imaging – past, present and future

Neutron imaging was first used successfully in 1935, shortly after the discovery of the neutron by James Chadwick. Since then it has developed and diversified in such a way that it is now used in research for a wide range of applications. Today, neutron imaging is at a pivotal point in its history. With the emergence of digital cameras and the rapid development of digital detectors with better spatial and temporal resolution, neutron imaging has developed into a valuable, reliable technique whose importance for materials research is finally being recognised. Many facilities around the world are planning to dedicate beam lines to neutron imaging or building imaging instruments. NMI3 recently started funding a Joint Research Activity in Neutron Imaging. In this article, Juliette Savin reviews the different neutron imaging methods available today, presents the new NMI3 Imaging Joint Research Activity and exposes some of the challenges still facing the technique.

Nikolay Kardjilov from the Helmholtz-Zentrum Berlin is the coordinator of the NMI3 Imaging JRA. Click to see our video where he tells about the aims of this collaboration.

What is neutron imaging? 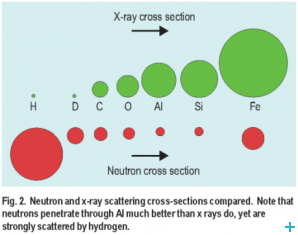 Neutron imaging refers to a collection of non-destructive testing methods, which exploit the penetration of neutrons to investigate the internal structure of objects. According to the universal law of attenuation of radiation passing through matter, different materials attenuate neutrons differently. In a typical neutron radiography experiment, the object being investigated is placed in a well defined neutron beam. A 2D position-sensitive detector, often consisting of scintillator optically coupled to a CCD or EMCCD Camera, is placed on one side of the object and records the radiation transmitted through the object. The shadow image thus produced gives information about the internal structure of the object studied.

Whereas radiography results in a two-dimensional image of the sample studied, tomography allows to visualise samples in three dimensions. For neutron tomography, the sample rotates in the beam and multiple 2D radiography images are recorded. A 3D representation of the volume of the object can be reconstructed using a mathematical algorithm.

Neutron imaging is complementary to other non-destructive imaging methods, in particular X-ray imaging. Whereas X-rays are scattered and absorbed by the electron cloud of an atom, neutrons interact with the atomic nuclei. Therefore neutrons are more sensitve than X-rays to light elements such as hydrogen, lithium, boron, carbon, and nitrogen. The degree of attenuation depends on the neutron energy. For some polycrystalline materials such as metals, a strong energy dependency of the attenuation is observed in the cold neutron range, due to Bragg scattering from the crystal lattice.

Although neutron imaging cannot compete with X ray imaging in terms of resolution, the high penetration depth of neutrons allows to study large samples of some materials, with volumes of up to 100 cm3 at medium resolutions, which X rays cannot do.This can be extremely useful in fields such as engineering.

“When you need imaging, you will usually start with X rays, because they are much easier to get” explains Thomas Bücherl from TUM, Germany. “But it is a good idea to have both, because you get information with X-rays that you do not get with neutrons, and vice versa.”
In some neutron imaging instruments, such as ANTARES at FRM II in Germany, there is the possibility to switch between neutron and X-ray beams to study the same samples.

In the early days of neutron imaging, the technique was done with film, using gadolinium as a converter. This allowed only for a certain type of science to be carried out with neutron imaging and many criticised the fact that the method wasn´t a quantitative method.
“Film is not a digital system, it is not linear, and it is very difficult to get quantitative information out of it. You need to scan the film point by point” explains Burkhard Schillinger responsible for ANTARES at FRM II in Germany. According to him, this is why neutron imaging didn´t really make it in the neutron world before 1990.

Since the early 1990´s however, neutron imaging has been transformed by the digital revolution and the use of CCD cameras instead of film. Suddenly, pixels could be counted, grey values could be quantified and imaging became a quantitative method.

Researchers then realised that they could get much better imaging, with higher resolution, by sacrificing intensity for higher collimation of their neutron beams – since the new electronic detectors were much more sensitive than film. And this has now become the key factor in neutron imaging instruments – collimators define the Collimation ratio, the ratio of the distance between the sample and the collimator aperture over the diameter of the aperture. The intensity of the neutron beam inevitably drops with collimation, but this can be compensated for by using very sensitive detectors.

What applications for neutron imaging? 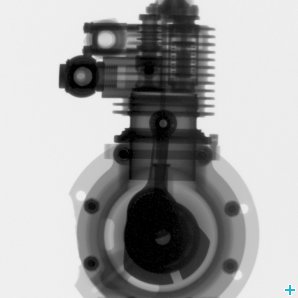 Neutron radiography of a Compressor – picture courtesy of FRM II

The unique ability of neutrons to easily penetrate metals and still be sensitive to light elements such as hydrogen, carbon, and nitrogen makes neutron imaging particularly useful for applications in fundamental research and industry.

For instance, neutron imaging is used routinely to highlight light materials such as hydrogenous substances with high contrast in engine parts or in hydrogen storing tanks and fuel cells.
Neutron imaging also allows to visualise the movement of fluids, such as oil or water, in large metal objects.

Neutron imaging has attracted the attention of companies in the car and aeronautical industries, which regularly visit neutron imaging facilities to carry out quality control tests or studies on engines, gear boxes or other metal parts.

Neutron imaging is non-destructive in nature, which also makes it an attractive method to analyse archaeological artefacts or pieces of Art.

Another application of imaging is the study of wooden objects, both for engineering or archaeological purposes.

Despite the wealth of applications of neutron imaging, neutron facilities have a hard time attracting users from the industry or archaeology worlds. “Although they produce nice pictures, which can be attractive, our methods often seem too exotic to companies or museums” explains Eberhard Lehmann, Imaging group leader at PSI in Switzerland.

Users from outside who come to neutron facilities to do imaging often have problems interpreting the results they get with neutron imaging. “Very often users just leave the interpretation down to us, because they really don´t know what to do with their results” explains Anders Kästner, expert in imaging and ICON instrument responsible at PSI.

Looking to the future?

According to Eberhard Lehmann, “there are indeed some good indications for an increase of the neutron imaging activities world-wide”.

Further afield, the reactor CARR in China already possesses two dedicated beam lines and ANSTO in Australia, J-PARC in JAPAN and SNS in the USA are planning their first neutron imaging facilities. 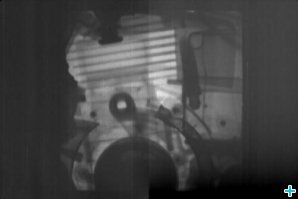 Frames from a two-stroke engine running at 3000 rpm, by stroboscopic imaging.

New, more sophisticated neutron imaging techniques have been developed recently, which also explains the new interest in neutron imaging. Techniques such as real-time imaging, stroboscopic imaging, energy selective imaging or neutron grating interferometry are now carried out routinely at facilities across Europe. They extend the scope of neutron imaging beyond conventional attenuation imaging and provide information about properties and phenomena until now difficult to study.

The development of highly efficient detector systems allows for real-time imaging, which can be carried out at most neutron imaging facilities with an intensive beam. This technique allows to follow a dynamic process in real-time. The limited brilliance of today´s neutron sources only allows exposure times of a few milliseconds per image, but better time resolution can now be obtained with stroboscopic imaging.

The first stroboscopic imaging experiment was carried out in 2002 in collaboration between FRM II, the ILL, the University of Heidelberg and PSI. A four-piston BMW combustion engine was inspected by stroboscopic neutron radiography technique at the high flux test beam line H9 at ILL achieving exposure times of few hundred microseconds. Since then, stroboscopic imaging has proved to be ideal to visualize the dynamics of lubrification liquids and cooling agents in metal casing and has become the method of choice for the imaging of combustion engines in operation.

Neutron imaging can provide more accurate information on a sample if carried out with selected neutron energies. The proof of principle experiment for energy-selective imaging was carried out at ISIS. Use of this method requires a cold neutron spectrum. In this method, the transmission signal is recorded position sensitively depending on the neutron energy being varied. Due to Bragg scattering in the crystal lattice of the material in the sample, a diffraction contrast is observed in the transmission images. This contrast allows to distinguish between different crystallographic modifications of the material and hence to make phase separation in 3D, non-destructively. The diffraction contrast provides information about the presence of mechanical residual stresses and textures in the sample.

Imaging of nano and magnetic structures

Better neutron imaging technology is still needed for imaging of very small structures and to improve the scope of magnetic imaging. Good, high-resolution magnetic imaging is crucial in particular for the study of superconducting materials.

NMI3 has decided to act on this by putting together a Joint Research Activity (JRA) focusing on the development of better components for neutron imaging and of new techniques using different interaction mechanisms of neutrons with matter to produce contrast, than conventional absorption imaging methods.

The JRA, funded by NMI3 and involving teams from FRMII, PSI, HZB, ISIS, LLB, JCNS and NPI, will focus in part on combining neutron imaging and scattering techniques, such as grating interferometry, which can be used to investigate structures at the micro and nano level together with innovative imaging with polarised neutrons, which can visualise magnetic fields in the direct space. The goal of this project will be the visualisation of microstructural changes in metallurgical samples under tensile or torsion stresses.

Another task within this JRA will be to develop techniques for vectorial magnetic imaging in the volume of nano and micro-structures. Existing magnetic imaging techniques (X-ray Photoemission ElectronMicroscopy, Atomic Force Miscroscopy, electron holography) are mostly surface techniques and do not provide direct information about the volume magnetisation of nano-objects.

One of the main limitations in neutron imaging right now is the spatial resolution of the detectors available today. As part of the JRA, a team at FRM II will also work on the development of better detector components, for better high-resolution imaging.

The other limitation is the neutron flux available for experiments. “We should optimise our detectors and also our beams for neutron imaging experiments. At the moment we cannot compete with synchrotron radiation facilities, which have better flux and better intensities” explains Nikolay Kardjilov, coordinator of the Imaging JRA.

One way to optimise neutron beams is to improve optical components used to focus the beams, the aim of another Joint Research Activity supported by NMI3, the Neutron Optics JRA.

The future is looking bright for neutron imaging. If it wants to compete with other imaging techniques, more available, easier to carry out and to interpret, such as X rays, effort and funding for technical development will have to continue to flow.

New imaging methods will offer new possibilities to physicists, material scientists, engineers, palaeontologists, archaeologists, and others, so that they can obtain better information on their objects of study. See our video and article here .

Watch Zoltán Kis and László Szentmiklósi from the BNC describe their work as part of the Imaging JRA.