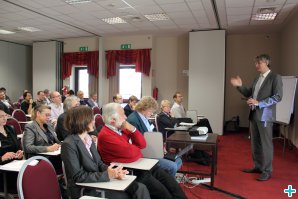 Every year, NMI3 brings together the members of its Board, Scientific Advisory Committee and General Assembly to discuss issues related to the management and future of the consortium. Joint Research Activities (JRAs) often take this opportunity to have one of their annual meetings and bring everyone together to discuss their projects.

This year, the meetings started on Tuesday 8th November with JRA meetings, a Board meeting and SAC meeting. The morning of Wednesday 9th November was dedicated to the General Assembly. JRA coordinators presented their most recent results, NMI3 Coordinator Helmut Schober updated everyone on recent issues and upcoming projects.

Herma Büttner did a brief presentation about last year´s Neutrons & Food workshop, which was partly funded by NMI3 and will be followed-up by the Neutrons & Food 2012 workshop at TUD. Information Manager Juliette Savin presented the new NMI3 website and Linda Udby from Copenhagen presented the E-learning website, to be integrated into NMI3´s Education pages, and to be developed as of 2012.