Big progress in the production of model biological membranes

An NMI3 JRA has made significant progress in the production of biological membranes that can be used for structural and dynamic characterisations. 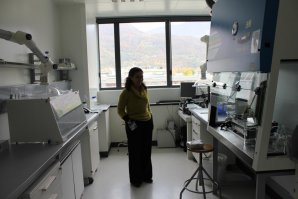 As part of the NMI3 Joint Research Activity on Advanced Neutron Tools for Soft and Bio-Materials , a team at the Institut Laue-Langevin (ILL) in Grenoble, France, has been working on producing model biological membranes as relevant as possible. Giovanna Fragneto, who is the coordinator of this task, told us about the big progress that has been made in the last four years.

To reach their goal, two main aspects had to be worked upon:

Composition of the membrane

Drawing of a model membrane (courtesy of Giovanna Fragneto)

The goal here was to demonstrate that they could produce robust, reproducible membranes from natural lipids and characterise them using neutron techniques. The team succeeded largely as they: 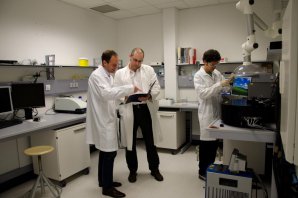 Natural membranes are fluid and fluctuating. When scientists attach them to a solid substrate so that they can investigate them with neutron reflectometry techniques, the membranes can lose some of this mobility. A large part of the work of this JRA task was to find ways of making these membranes more mobile, more fluctuating, by moving them away from the solid substrate with cushions. While there are many ways in which this could be achieved, it is a rather challenging goal. The team focused both on double bilayers and polymer layers. Even though progress has been made, which is reported in a number of publications, they haven’t reached yet a fully satisfactory model.

Advantages of taking part of NMI3

According to Fragneto, the opportunity to meet scientists from other facilities working on Sample Environment is very important and it fostered new collaborations. The funds provided by projects like NMI3 are very important to push forward these kinds of developments in the facilities, where budgets for research activities not related to instrument development are often limited.

Scientists who participated in this project were post-docs Yuri Gerelli and Irena Kiesel, and PhD students Alexis de Ghellinck and Robin Delhom.

NMI3 thanks Giovanna Fragneto for reviewing this article.