Egyptian statuettes of Osiris: production unveiled by neutrons and laser

A group of scientists from Italy, Germany and the United Kingdom applied an innovative approach to study Egyptian copper alloy figurines. 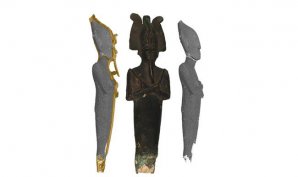 The world’s museums exhibit collections of precious artefacts from thousands of years ago. Very often it is the case that not much is known about how those ancient artefacts were created. There is a number of limitations to investigate them as traditional sampling techniques risk damaging the materials. In the search for non-invasive methods, a group of scientists have combined three different techniques to analyse copper alloy figurines. They wanted to know how the figurines were crafted, their composition, and how they are deteriorating.

The figurines were provided by the Egyptian Museum of Florence in Italy. While the year they were created is unknown, we know that the first figurine was brought from Egypt to Italy by the Schiaparelli archaeological expeditions in the 19th century, and the other two figurines were donated to the museum by a noble family in 1868 and 1848. They represent Osiris, the god of the afterlife, the underworld and the dead, with arms and legs bound to the body by mummy bandages, and holding the traditional insignias of kingship: the crook and flail.

To look inside the figurines, the group conducted high resolution neutron tomography at the Helmholtz-Zentrum Berlin, time of flight neutron diffraction at the ISIS neutron source in the UK, and performed laser induced plasma spectroscopy (LIPS) measurements. Thanks to the NMI3 Access programme their travel and subsistence expenses to Germany were covered.

Thanks to this new approach, these artefacts could be characterised like never before. Even though the figurines are originating from different areas in Egypt the results show that they were all crafted with similar core materials, same alloy compositions, and with a similar method for preparation of the casting mould. The latter was executed starting from forming and firing an earthy core. The wax model for casting was then sculptured on this earthenware core, and eventually the mould was completed with the application of the mantle and the final firing.

This innovative analytical approach proved very successful to analyse ancient artefacts with the big advantage of not being invasive for the artefacts under study. This combination of techniques will be applied to investigate other bronze statuettes of the Egyptian Museum of Florence.

NMI3 thanks Juri Agresti and Salvatore Siano for reviewing this article.

How to make train rails as straight as they should be

Scientists combine three different methods to better understand and predict the behaviour of materials in rails.

From ash to eco-friendly solution for hazardous metals removal

Scientists suggest a new method to transform power plant ash into materials that could be used for nuclear waste treatment or soil remediation.

Biosensors will benefit from new method to produce membranes

NMI3 collaboration has taken a significant step in the production of biological membranes.