How does an enzyme detoxify the cells of living beings?

Scientists use neutrons to shed light on the reduction of H2O2 to water by CcP, concluding that the process which is focus of a long-standing and highly contentious question need to be reassessed. 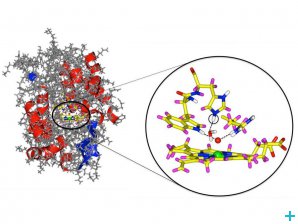 Molecular structure of CcP Cytochrom c peroxidase enzyme with a detail from the active center. The oxygen atom is marked in red and the iron in green. The newly discovered hydrogen atom is circled. © Andreas Ostermann / TUM

Cytochrom c peroxidase enzyme with a detail from the active center. The oxygen atom is marked in red and the iron in green. The newly discovered hydrogen atom is circled. © Andreas Ostermann / TUM

Cytochrome c peroxidase (CcP) is an enzyme thought to detoxify the cells of numerous living beings by reducing hydrogen peroxide (H2O2) to water. This process results in a meta-stable state of CcP historically called compound I. Just like in the haemoglobin that carries oxygen in our blood system, the reduction of H2O2 occurs because CcP has an iron-containing centre that bonds with oxygen. However scientists do not seem to agree on the nature of the bond between the CcP iron atom and the oxygen, which has been cause of dispute for the past 30 years.

One of the main questions to unveil is whether the iron-bonded oxygen atom carries a hydrogen atom or not. Given that neutron scattering is a particularly suitable technique to determine the position of hydrogen atoms, to shed new light on the issue a group of scientists travelled to the Institute Laue-Langevin in France and the Heinz Maier-Leibnitz Zentrum (MLZ) in Germany to investigate the CcP enzyme crystals. To guarantee that during the analysis the enzyme was in the compound I state the experiments were conducted at temperatures as low as -173°C, at the MLZ. The latter experiments, thanks to which they determined the Compound I state, were supported through the NMI3 Access Programme. The results were published in the journal Science.

Surprisingly the results show that oxygen does not bond to hydrogen but only to the CcP ferrous centre. Another surprising finding was that a residue in the CcP active centre carries two hydrogen atoms rather than only one as expected. This means that the whole process of reduction of H2O2 to water by CcP needs to be reassessed.

This work has received NMI3 support to conduct experiments at the MLZ in Germany.