Small magnets the size of a molecule could be the memory chips of the future. Low dimensional molecular magnets are being studied as potential memory elements for information storage or quantum information processing, or as components for molecular machines. This is due to a phenomenon called single molecule magnetism [1], that is, the observation of a hysteresis at the molecular level, in the absence of any long range order. The origin of this effect is strongly dependent upon the anisotropy of the molecular spin. Component ions with a first order orbital angular momentum are therefore particularly interesting , due to the large anisotropy associated with them. In particular, octahedral cobalt (II) has been shown previously [2] to display an array of interesting physical properties, including some reports of unusual slow relaxation of magnetisation. 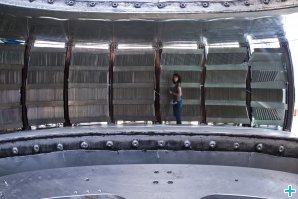 In a recent study [3] with researchers from the University of Manchester and scientists from the FRM II, along with theoretical work performed at the University of Leuven, we have gone back to basics to study cobalt dimers – pairs of cobalt ions, surrounded by coordinated organic molecules. Dimers are the smallest possible exchange-coupled cluster and have the simplest possible exchange Hamiltonian, thus making them easy to study theoretically.

The work relied heavily on the use of inelastic neutron scattering, as this technique can directly probe the energy level associated with an exchange-coupled dimer. As opposed to other techniques, such as electron paramagnetic resonance (EPR), the selection rules allow the observation of more transitions and the data can be collected without applying a magnetic field. The inelastic neutron scattering experiments were performed using the cold neutron time of flight spectrometer TOFTOF (photo) at the FRM II; the measurements utilised several configurations, including high resolution data up to 20 mueV.

The use of these high resolution configurations resulted in well- resolved spectra for both samples studied, complemented by the equally well-resolved EPR spectra. The availability of such high quality data was key to the success of the work. This allowed the zero field exchange interactions to be determined unambiguously. Funding from NMI3 allowed researchers from the University of Manchester to spend time at the FRM II, which ensured that the data was of the highest quality and complemented the comprehensive set of multi frequency EPR and magnetometry data that had already been obtained.

Subsequent analysis of the inelastic neutron scattering data, coupled with the use of ab initio methods, allowed significant progress to be made with analysing the more complex EPR spectra. In particular, we could fix varying parameters enabling the full characterisation of the exchange and g matrices. As this was possible for two different clusters with closely related structures, it is now possible to make some observations about the relationship between the structure of a cluster and the magnetic properties observed. This suggests that the relationship between the local crystal field around the cobalt centers and the superexchange pathway, is controlling the magnetic interaction.

Others have noted the importance of the orientation of gi in interpreting magnetic data of polymetallic CoII complexes [4]. In a sense, this is analogous to magnetostructural correlations for spin only ions such as copper (II), where the crystal field directions are easily established by inspection. For cobalt (II), the local crystal field can vary subtly with minor changes in ligand sphere, and this could explain the diverse magnetism displayed by polymetallic cobalt clusters and extended networks.

Dr Richard Mole was formerly an instrument scientist at the FRM II and is now based at the Bragg Institute, at the Australian nuclear science and technology organsiation.