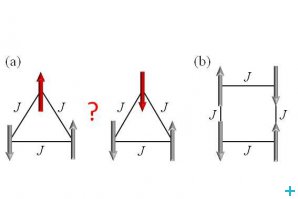 Zorko Figure 1. Geometrical frustration prevents simultaneous antiparallel alignment of spins on all antiferromagnetic bonds J (a) on a triangle, (b) as opposed to a square.

Following the breakthrough discovery of high-temperature superconductivity, copper oxides have been the focus of intense research for almost three decades. The link between superconductivity and magnetism coexisting in some of these materials is still unexplained. In the basic, conventional copper oxide materials, the atomic spins all line up together at low temperatures – something known as long-range magnetic order. However, a fascinating array of other behaviours can also be found in copper oxides, depending on how the atoms are arranged. A particular focus has been on geometrically frustrated lattices, whose triangular geometry prevents simultaneous energy minimization of all bonds of nearest-neighbour spins and thus leads to unconventional magnetic states [1]. The frustration is strong on spin lattices with a triangular motif when the dominant nearest-neighbour exchange interaction favours antiparallel alignment of interacting spins, as depicted in Figure 1. 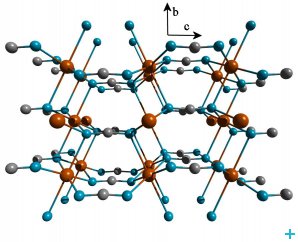 Zorko Figure 2. Crystal structure of CuNCN: orange, blue and grey spheres denote copper, nitrogen and carbon ions, respectively. According to Ref. 2 the appropriate spin model of the system is a 2D spatially anisotropic triangular lattice in the crystallographic ab plane, while Ref. 3 claims CuNCN to be a quasi-1D system with spin chains running along the c crystallographic axis.

Copper carbodiimide, CuNCN, is a new copper-based antiferromagnet that has been recently crystallised and could potentially possess unconventional magnetic properties. Its NCN2- groups are chemically equivalent to O2-, yet much larger than these ions. Therefore, CuNCN is a chemical analogue of the cupric oxide, CuO, but its electronic properties might be very different. Indeed, from the magnetic point of view, CuNCN features magnetic susceptibility that is suppressed compared to copper oxides by one order of magnitude. In addition, it apparently lacks the conventional long-range order at least down to 2 K [2], in clear contrast to CuO that orders antiferromagnetically at 231 K. Replacing oxygen with other anions thus provides an exciting opportunity to extend the class of materials with exotic electronic properties and to eventually control these properties by chemically modifying the exchange bridges. Numerical investigations of CuNCN [2,3] agree that the reduced susceptibility should result from very strong exchange couplings, however, they disagree on the dimensionality of the appropriate spin model for CuNCN. The first of the proposed models features a frustrated triangular lattice [2], while the second one predicts a much less frustrated quasi-1D lattice [3]. An experimental verification of the presence/absence of the conventional order at low temperatures could resolve the issue of the appropriate model, since the latter model predicts magnetic ordering below around 100 K.

muSR insight to magnetism in CuNCN

In our attempt to determine the ground state of CuNCN [4] and settle on the appropriate spin model, we’ve performed muon spin relaxation (muSR) measurements at the MUSR facility (ISIS, Rutherford Appleton Laboratory, United Kingdom) and at the GPS facility (Paul Scherrer Institute, Switzerland). This local-probe experimental technique is especially suited for cases where other experimental methods fail, because it is extremely sensitive and can detect very small local fields, through precession of muon polarisation. In addition, it can easily distinguish between static and dynamical local magnetic fields. When fields are static and long-ranged, the projection of the muon polarisation on a given axis will coherently oscillate, while dynamical fields will lead to a monotonic decrease of the muon polarisation. 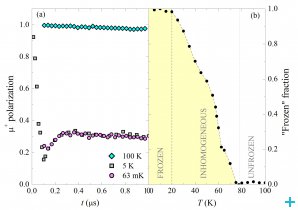 Zorko Figure 3. (a) Relaxation of mu+ polarisation in zero applied magnetic field. The shape of the relaxation curve changes below 80 K and develops a dip, characteristic of disordered frozen local magnetic fields. (b) Muon relaxation experiment in weak transverse magnetic field reveals a broad inhomogeneous region of coexisting dynamical and static local fields at muon sites, extending between 20 and 80 K.

In order to probe the nature of the internal fields at muon stopping sites in CuNCN, we’ve first performed muSR experiments in zero applied magnetic field. A clear change of the muSR relaxation curve around 80 K (Figure 3(a)) from a monotonic curve at high temperatures to a non-monotonic curve at low temperatures immediately reveals spin freezing that occurs around 80 K. However, in contrast to all numerical predictions, from the specific shape of the low-temperature depolarisation curves we can unambiguously conclude that the frozen-spin state lacks long-range order down to at least 63 mK (Figure 3(a)). Thus, the state rather resembles a spin-glass. We’ve further inspected the spin-freezing process by applying weak transverse magnetic field. In this muSR experimental setup, the initial muon polarisation is a direct measure of the fraction of muons sensing no static internal fields. In CuNCN the process of spin freezing is extremely slow, as it extends from 80 down to 20 K (Figure 3(b)).

The spin-glass-like behaviour observed in CuNCN is by no means conventional. CuNCN lacks usual fingerprints of the spin-glass transition typically observed in bulk magnetization or specific heat measurements [4]. Moreover, the spin freezing process is extremely slow, as we have observed an inhomogeneous phase with regions of both frozen and unfrozen fields coexisting between 80 and 20 K. The stability of this inhomogeneous phase in such a broad temperature region is unprecedented for canonical spin glasses. Therefore, we have explored another interpretation of the muSR data, in which the observed spin freezing would be muon-induced [4]. However, our recent nuclear magnetic resonance experiments speak against this scenario. The observed unusual magnetic state of CuNCN thus apparently stems from the significant geometrical frustration of the corresponding spin lattice, and thus speaks against the theoretically predicted 1D spin model.

Andrej Zorko is scientific collaborator at the Jožef Stefan Institute, Ljubljana, and at the EN–FIST Centre of Excellence, Ljubljana, Slovenia