Researchers suggest an enhanced method for the study of biological membranes

The analysis of cholesterol and lipids transfer shows the advantages of combining the methods of RSE and vesicle fusion to prepare tBLMs solid-supported membrane models. 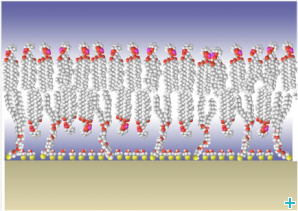 tBLM Cross-section of a tethered bilayer membrane, attached to a surface via the molecular 'anchors'. Image courtesy of the authors.

Cross-section of a tethered bilayer membrane, attached to a surface via the molecular 'anchors'. Image courtesy of the authors.

The cell membrane of most living beings is constituted of a lipid bilayer that separates the cell from its surroundings. Membranes also transport a myriad of components, such as drugs in the blood, detersive when we wash the dishes, and signal transduction in biosensors. Researchers can create lipid bilayers in vitro to investigate the physical and chemical processes that occur in biological membranes. There are several types of these model lipid bilayers, such as tethered Bilayer Lipid Membranes (tBLMs). These membranes offer a series of advantages that make them suitable for research: they have few defects, increase the stability of supported membranes, and are highly resistant to electricity. However they exhibit a number of deficiencies that could be overcome by investigating tBLMs further.

For the first time, researchers have analysed the formation of tBLMs by a combination of a rapid solvent exchange (RSE) and vesicle fusion to investigate material exchange between RSE-completed tBLMs and vesicles.

Thanks to NMI3 support the group conducted neutron reflectrometry (NR) experiments at ISIS. Complementary experiments included electrochemical impedance spectroscopy (EIS) and fluorescence microscopy (FM). By using these methods, the group could observe how the transfer of cholesterol and lipids from tBMLs to the vesicles occurs.

The group concluded that it is possible to enhance the transfer process by modifying the RES method by vesicle-tBLM material transfer. Indeed their results confirm that cholesterol was transferred from the vesicles into the tBLMs, as they attained cholesterol concentrations inside the tBLMs similar to that in the vesicles. Another important finding is that it is possible to transfer several components, including phospholipids, simultaneously. The group observed that the exchange occurs differently with cholesterol and lipids, the latter being homogeneous, asymmetric, and with a slower exchange rate than the former.

These findings are an important contribution for the preparation of model lipid bilayers. In particular, more robust and biologically relevant tBLMs can now be prepared by combining the two methods of tBLM formation – RSE and vesicle fusion.

Gintaras Valincius from the Institute of Biochemistry of the Vilnius University in Lithuania has received NMI3 support to perform experiments at ISIS.

NMI3 thanks Gintaras Valincius for reviewing this article.