Spintronic devices, electronic devices that utilise the spin degree of freedom of electrons, hold unique prospects for future technology. Recent research by Dr A. Drew and colleagues shows that it may be possible to use spintronics to develop faster, smaller computer chips combining processing power and memory. The research was carried out at the Low Energy Muon Spin Rotation spectrometer of the Paul Scherrer Institut in Switzerland, thanks to funding by NMI3.
The main current application of spintronic devices lies in non-volatile memory. Future spintronic devices could deliver low-power logic, possibly at the quantum level, and when combined with both data communication and memory elements of a computer’s architecture, this functionality could help to gain significant energy efficiency and computational speed. 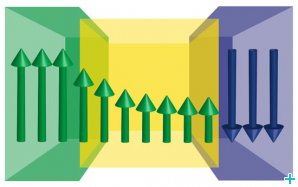 Spintronic devices Figure 1: An archetypical spintronic device: the spin valve. A spin polarised current (arrows) is injected from a magnetic layer (green) into a non-magnetic spacer layer (yellow), where the spin polarisation is reduced (as indicated by the reducing arrow height) as the current flows further from the interface until it finally reaches a second magnetic layer (blue).

The most common method for using the spin in devices is based on the alignment of the electron spin (“up” or “down”) relative to either a reference magnetic field or the magnetisation orientation of a magnetic layer. Device operation normally proceeds with measuring a quantity, such as the electrical current, that depends on how the degree of spin alignment is transferred across the device. The electrical resistance of the device then depends on the reference magnetic field, or magnetisation orientation, a phenomenon known as magnetoresistance. The so-called “spin valve”, shown in Figure 1, is a prominent example of such a spin-enabled device that has already revolutionised hard drive read heads and magnetic memory. The reduction in spin polarisation in the yellow spacer layer is governed by the ‘spin penetration length’, which is related to intrinsic spin relaxation mechanisms in the spacer layer. 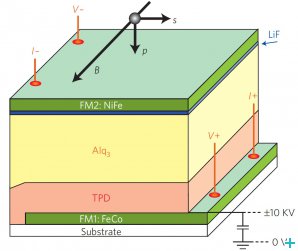 Understanding the transfer of spin polarisation in real device structures remains one of the most difficult challenges in spintronics, since it depends not only on the properties of the individual materials that comprise the device, but also on the structural and electronic properties of the interface between the different materials. It is important to understand these properties, especially for the relatively new field of organic spintronics. However, many of the standard techniques used to measure spin polarisation in conventional semiconductors cannot be applied. There is a need for direct and spatially-resolved measurements of how spin propagates through organic spin-based devices. Measurements of spin penetration could offer clues to the relevant spin relaxation mechanisms of organic semiconductors.

For this research, we used the world’s only Low Energy Muon Spin Rotation (LEmuSR) spectrometer to perform a depth-resolved measurement of the spin polarisation of current-injected charge carriers in an organic spin valve [1]. Crucially, the measurements were carried out below buried interfaces of a fully functional technologically realistic device (Figure 2). This enabled the correlation of the device magnetoresistance and the measurements of spin penetration on the nanoscopic lengthscale (Figure 3). These results suggest that the spin diffusion length is a key parameter of spin transport in organic materials. 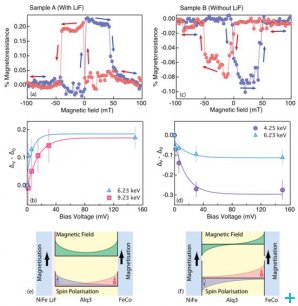 In an extension to this work on spin penetration in the spacer layers, our group investigated how it is possible to engineer the magnetic, semiconducting interface to reverse the spin polarisation of the charge carriers in the device [3]. They did this by including a very thin (1nm) layer of Lithium Fluoride between the ferro-magnet and organic semiconductor. Figure 4 shows the magnetoresistance and the spin polarisation in the organic spacer close to the top electrode. Figures 4(e) and 4(f) are schematic diagrams showing the different states for the two devices. We can see that the inclusion of the Lithium Fluouride layer at the interface, which has an intrinsic electric dipole moment, reverses the spin polarisation of the charge carriers at that interface and therefore change the sign of the magneto-resistance. This opens up the possibility of an electrically controllable spin valve, by the inclusion for example of a ferroelectric material at the interface.

This work is a clear demonstration that Low Energy Muon Spin Rotation measurements can provide unique information about the degree of spin polarisation of the injected charge carriers, as well as their sign, within a buried active layer of a functional organic spin-valve device. The results highlight the unique potential of the technique to reveal the role of the various mechanisms that limit the spin coherence, especially in systems involving organic materials. More specifically, phenomena occurring in the organic semiconductor and those occurring at the interface can be differentiated.

Dr. A. Drew is a lecturer in the Condensed Matter Physics Group at the School of Physics of Queen Mary, University of London, and leads the spin spectroscopy sub-group.