Over the last decade, there has been growing interest in the development of lightweight metal hydrogen compounds, or hydrides, capable of reversible hydrogen storage at low and medium temperatures, for use in the zero-emission hydrogen cars of the future. Exploiting the high volumetric hydrogen capacity of metal hydrides could help to overcome the technological limitations of high-pressure hydrogen storage tanks, on the road to economically-viable hydrogen storage systems. 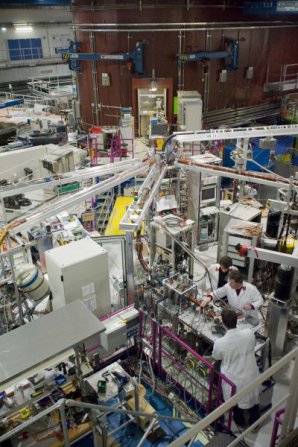 NEPOMUC at FRM II, where the PLEPS experiments were carried out

Magnesium-Titanium (Mg-Ti) alloys are promising materials for applications such as hydrogen storage media and metal hydride rechargeable batteries. Hydrogenation of Mg-Ti films with sufficiently high Titanium concentrations leads to the formation of a cubic (fluorite) MgMgH1-yTiyHx phase with substantially faster hydrogen transport capacities than the common tetragonal (rutile) MgH2 phase [1]. Such Hydrogenated Mg-Ti films can show high hydrogen storage capacity, close to the targets set for application in the zero emission hydrogen cars of the future. Furthermore, upon hydrogenation, the optical properties of Mg-Ti thin films change markedly from the metallic to the insulating metal hydride state, making these films very attractive for use in fast hydrogen sensors and hydrogen switchable mirrors (fig. 1) [2].

To study this phenomenon, we carried out positron lifetime studies on the pulsed low energy positron beam system (PLEPS) of the Forschungs-Neutronenquelle Heinz Maier-Leibnitz (FRM II) in Garching, Germany, thanks to NMI3 funding. Our research revealed the presence of defects in the crystal lattice resulting from the removal of two adjacent atoms, also called divacancies, both in the as-prepared and the hydrogenated Mg-Ti metal films. We deduced the presence of relatively large local lattice relaxations around the divacancies in cubic MgH2, pointing to a major role played by these divacancies in the mechanism leading to the fast hydrogen transport in this cubic MgH2 phase.

PALS experiments on the PLEPS spectrometer

The transport of hydrogen in materials is of central importance, as it determines the rate of hydrogen loading and unloading. Vacancies are empty atomic positions in the crystal lattice where a metal or hydrogen atom has been removed. These vacancies strongly affect the mobility of hydrogen and metal ions, in the metal as well as in metal hydrides and, consequently affect hydrogen sorption kinetics. We exploited the high sensitivity of positron annihilation lifetime spectroscopy (PALS) to determine for the first time the presence and type of vacancies in Mg-Ti and Mg-Ti-H thin films [3,4].

By exploiting the unique capabilities offered by positron lifetime spectroscopy using PLEPS, we were able to show the presence of divacancies in the metal sublattice of both the rutile and fluorite MgH2 phases. The positron lifetimes of these vacancies are comparable, though their size must differ considerably. Hence, we deduce the existence of local lattice relaxations in the fluorite phase, which may play a crucial role in the enhanced hydrogen transport in fluorite MgH2.

Our research is now focusing on stabilising the promising fluorite phase into MgH2 nanopowders enabling bulk synthesis. We are doing this by an innovative process, involving the synthesis of Mg-Ti nanoparticles through spark discharge generation [5]. We are also investigating different vacancy concentrations in this interesting metal hydride phase, by adding suitable catalysts, in order to produce better nanocomposites for hydrogen storage applications.

S.W.H. Eijt is Assistant Professor at the Technische Universiteit Delft in The Netherlands.

A mirror consisting of a Mg0.7Ti0.3 thin film after applying a hydrogen containing gas, the mirror changes into a light absorbing Mg0.7Ti0.3Hx film.

Figure 3: (Left) Positron lifetime of metallic and hydroge¬nated Mg1-yTiy films as a function of volume per formula unit. The fitted solid line indicates the expected effect of increased volume on the experimental positron lifetimes for the divacancies in the metallic films.

(Right) Artistic impression of the relaxed geometry of the divacancy and facilitated hydrogen mobility in fluorite phase MgH2.