The BER II neutron source is back in operation

Following the interruption in availability, users can now go to Berlin to conduct experiments. 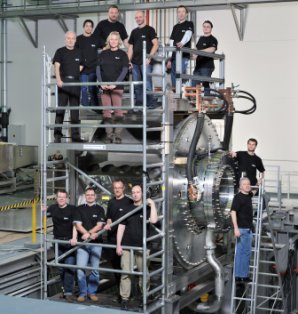 The High-Field Magnet (HFM) has attained 26 tesla in an initial test and thereby exceeded expectations. The HFM team is pleased about the well-deserved success. © HZB/Ingo Kniest

Following conclusion of more than a of year of repairs and refurbishing, the BER II neutron source will shortly be available to its international user group again. The facility was powered up on Wednesday, February 18 and attained its nominal power level of 10 megawatts. Scientists of HZB are meanwhile preparing the measurement equipment so that experimental work can resume following a brief start-up period.

During the service interruption, a weld joint was eliminated that was known to be a potential weak point. This involved a weld joint for a seal located in the area of the separator between the two reactor pool halves. Damage to this weld joint was discovered in 2010 and has been carefully monitored since that time. This did not involve a component critical to safety; nevertheless, it was decided in 2013 to completely remove the weld joint.

At the same time, the new High-Field Magnet went through final assembly and was setup in its final operating position inside in the Neutron Guide Hall. Its 26-tesla magnetic field was first generated in December 2014 and it maintained this value stably over a longer period of time. So it even exceeded its target value of 25 tesla.

Following the maintenance period, an important objective was reached with the successful resumption in BER II operations: participants of the international Neutron School can again be offered actual neutron experiments of the customary high quality. The 12-day advanced course for young scientists will be taking place in Berlin for the 35th time, from February 26th to March 6th.

Developing and successfully setting up the High-Field Magnet, unique for neutron experiments, has only taken 7.5 years. All of the comparable hybrid magnet construction projects worldwide during the past 25 years have taken between 9.5 and 16 years. The brief project length can therefore be viewed as top of its class. In addition, the project remained within its planned budget of just under 21 mil. EUR after adjusting for inflation.

The High-Field Magnet represents yet another first-class instrument that is being connected to the neutron source for the final BER II support period. Completely new kinds of experiments become possible that will op! en up acc ess to new science, such as researching superconduction and magnetic phase transitions in solid-state materials, for example.

HZB is a member of the NMI3 consortium. Thanks to the NMI3 Access Programme users can apply for NMI3 support to conduct experiments at the neutron facility.

Egyptian statuettes of Osiris: production unveiled by neutrons and laser

A group of scientists from Italy, Germany and the United Kingdom applied an innovative approach to study Egyptian copper alloy figurines. Read here .

NMI3 supports a European collaboration to develop an atmospheric plasma deposition system to produce Boron-10 layers. You can read the article and watch our video here !

A JRA supported by NMI3 is working on a new humidity chamber. The instrument will be used for neutron scattering experiments to reproduce the human body conditions in order to shed light on biological processes such as the development of Alzheimer’s disease. Check out our video and article here !