What if one could use a single platform to apply for neutron experiments in any European facility?

Thanks to NMI3 support a group is working on an Integrated User Access.

To submit a proposal for neutron scattering experiments can be a long procedure. Aside from creating a new username and password for each facility, one also has to answer to different questions and requirements. Thanks to NMI3 support, a group is working on an Integrated User Access (IUA) that could make this procedure easier to both users and facilities. The coordinator of this initiative is Thomas Gutberlet, who is head of the user coordination department at the Helmholtz-Zentrum Berlin. He told me about the work developed for this ambitious project. 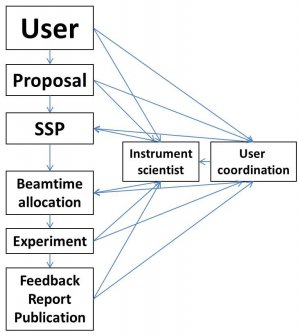 The idea was initialised by the Umbrella project of the PANDATA network showing that a common entry point to access large scale facilities is possible and feasible. It seemed a natural idea to follow this concept to ease and facilitate access to European neutron facilities and to harmonise procedures.

The main objectives of the IUA are to discuss and define how to harmonise the proposal system for users among the European facilities. User offices around Europe aim to create a transparent way for users to inform the facilities about e.g. the projects they are planning, so that they can have access to the beamlines and instruments in a simplified way. Once a standardised system is implemented users will follow similar steps in all facilities, from the proposal submission to the experimental report. Was your high-quality proposal rejected for lack of beamtime in a facility? You will be able to easily re-submit it to another facility and the reviewers will be aware of the value of the experiments you plan to conduct.

According to Thomas Gutberlet, “without the NMI3 framework it would have been much more difficult to develop this”. Thanks to the project, members of the facilities’ user offices can meet regularly to share experiences and relevant information.

The group has already started to look at the proposal submission procedures in each facility and the sort of questions asked. Users themselves get involved in discussions at the facilities’ user meetings and namely through a survey distributed in all the facilities. The group can thus explore ways to harmonise these procedures and merge them into a single platform.

A software prototype to show how the future platform can operate is planned for 2014. In the future, the goal is to provide neutron users with a unified entry point through which they can submit proposals to any participating facilities, and reviewers will be able to keep a track record of the users’ submissions.

With thanks to Thomas Gutberlet.

For information on the user survey, please have a look at the article Where the users are and what the users do: A survey on NMI3 users by Thomas Gutberlet and Stefan Janssen at Neutron News, 25(1), 2014.