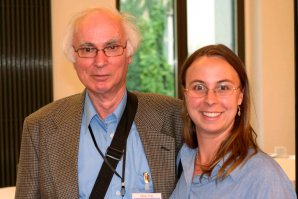 Kirrily Rule and her PhD supervisor Trevor Hicks at PNCMI 2006

Can you tell us about your studies and your scientific field?

My PhD in Physics was also completed at Monash University (2004) and focused on the magnetic properties of a 2D antiferromagnet, investigated using various neutron scattering techniques. I am still interested in low dimensional and exotic magnetic systems including geometrically frustrated materials. More recently I have been investigating 1 dimensional quantum magnets.

I began using neutron scattering to investigate the magnetic properties of materials during my PhD. These measurements were taken not only at the HIFAR reactor in Sydney, Australia, but also at the ILL and ISIS. My first postdoc was based in Canada where I performed experiments at both the Chalk River Labs in Canada and at NIST in the USA. From there, I became an instrument scientist at the cold-neutron triple-axis spectrometer, FLEX, at Helmholtz Zentrum Berlin in Germany. After 6 years at HZB it was time to return back to Australia to take up a position at ANSTO as instrument scientist for the thermal triple-axis spectrometer, TAIPAN. Most of my measurements involve inelastic neutron scattering using both triple-axis and time-of-flight methods as well as polarized neutron techniques. I have also performed some single crystal and powder diffraction studies to investigate magnetic structural properties.

Can you describe step by step how you got to your position?

At Monash University in Australia I studied both Art and Science degrees but my passion was always Physics. I chose to undertake a PhD in condensed matter physics with Trevor Hicks – a man well known in the neutron scattering community for developing polarised neutron methods for the study of magnetism. During my PhD, I was fortunate to undertake neutron scattering experiments not only at ANSTO in Australia, but also at ILL and ISIS. Here I investigated the properties of a two-dimensional magnetic material. Upon completion of my studies, I moved to Canada to take up a post doc position with Bruce Gaulin to investigate both low dimensional and frustrated magnetism. After 2 years I moved to Berlin to work at the Hahn-Meitner Institut (now known as Helmholtz Zentrum Berlin) to take up a position as co-instrument responsible of the cold neutron triple axis spectrometer, FLEX. After giving birth to my son, Nolan, I moved back to Australia to take up a permanent position as an instrument scientist for the thermal triple-axis spectrometer, TAIPAN. This year I was also awarded an adjunct Associate Professor position in the School of Physics at the University of Wollongong.

Have you got any publications?

An updated list can be found from Web of Science, or Google Scholar.

What percentage of your time do you dedicate to your family/ work/ for you?

Since my son was born (in 2011), I now enforce upon myself much stricter schedules to promote a work/family balance. ANSTO have an onsite child care centre which is extremely useful – but it means that my working day is restricted to the operating hours of the centre. This also means I spend time with my son in the car, where I can hear about his day. I also make sure that I spend the early evening with my son and husband, and I tell my users that I can contact them, or come back to the institute later in the evening. The time I have for myself is lunch time. I instruct aerobics and fitness classes at work during lunch which allows me to switch off for an hour and reinvigorate with some exercise. I feel lucky to have an employer and neutron users who are flexible with these working arrangements and I believe that I have finally found a suitable balance to work with a young family.

Who or what is your mentor or greatest inspiration?

I find that my inspiration comes from those around me. When I see passion and energy in a co-worker or colleague, I feel motivated to do more. Sometimes in my job I get so carried away with instrumentation that I forget to look at my science. Often a colleague will start to talk about their science and suddenly I am inspired to progress with my own scientific challenges.

What is the most challenging thing you have faced in your career?

There are always many challenges in a career – mine has certainly been no different. I think one of the challenges that keeps coming up is related to work/family balance. This also includes moving to and living in different countries. I know that if it weren’t for my husband and son, I would probably get so distracted by work that I would have no balance, but since family is important to me they make sure that I take the time to switch off occasionally. It is also nice to be back in Australia to be closer to extended family.

Yang Zhao and Kirrily Rule working on the C5 spectrometer at the Chalk River labs in Canada, 2004

Installing the 12T magnet on TAIPAN at ANSTO, Australia, 2013