Prof. Thomas Brückel will be the new Director of the MLZ, taking over from Prof. Dieter Richter. 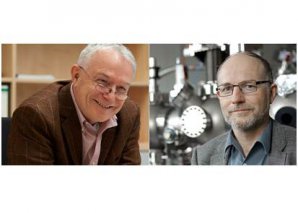 At the end of March, Prof. Dieter Richter of the Research Centre Jülich not only retires, but also passes his position as Heinz Maier-Leibnitz Zentrum (MLZ) Director to Prof. Thomas Brückel. Officially, however, Prof. Brückel has already taken the job as MLZ director at the beginning of this year.

Prof. Dieter Richter studied physics in Braunschweig and Aachen and worked as a postdoctoral fellow at the Brookhaven National Laboratory, one of the largest research centers in the United States in the state of New York. After his return he completed his habilitation in Aachen and then went as a scientist at the European counterpart to Brookhaven, the Institut Laue-Langevin in Grenoble. His research there was mainly the high-resolution spectroscopy – in particular the spin-echo method to study soft matter and biological macromolecules – to which he remained true even after his appointment in 1989 as director of the Institute for Solid State Research Institute at the Forschungszentrum Jülich. Richter is as neutron scatterer and dedicated representative of the European users of neutron sources well known with an excellent reputation worldwide, and has therefore been honored with many prestigious awards. He was honored in 2009 for his life's work with the Walter Hälg the European Neutron Scattering Association award. As a member of all major organizations and as an expert in this field, he was called in many bodies – even advising the federal government – and is still highly sought after as a consultant and editor of reputable magazines. For the period after his active and labor-intensive time as director of the Institute for Neutron Scattering at Forschungszentrum Jülich and as MLZ director he will continue to work scientifically, but without the management obligations of the past: “There will be more time for the many good things in life. For traveling, hiking, cultural events, and last but not least for the family.”

Prof. Thomas Brückel originates from Württemberg and studied physics in Tübingen. He discovered his enthusiasm for neutrons early on, before his doctoral thesis, which he did partly at Hahn-Meitner Institute (now Helmholtz Zentrum Berlin) and partly at the Institut Laue-Langevin. After completing his thesis, he returned to Grenoble. Brückel discovered the world of synchrotron radiation during his time at the German Electron Synchrotron DESY Hamburg. In 1997 he was appointed as director of the Institute for Solid State Research in Jülich, and in 2006 he took over the job as director of the Jülich Centre for Neutron Science (JCNS). Since 2011 he is also director of the Peter Grünberg Institute, which is dedicated to basic research in the field of new physical concepts and materials in information technology and related fields. Brückel’s interest as a physicist is targeted to magnetic nanostructures, quantum phenomena in solids and scattering methods.
Brückel is a proud father of three daughters, who are also enthusiastic about sciences and engineering. The avid mountaineer wants to first listen to the suggestions of the staff members before shaping together a strategy for the further development of MLZ. ”My goal is to unite the best of both worlds in this unique collaboration between Technical University and Helmholtz centers.”

The MLZ is a member of the NMI3 consortium.

How does an enzyme detoxify the cells of living beings?

Scientists use neutrons to shed light on the reduction of H2O2 to water by CcP, concluding that the process which is focus of a long-standing and highly contentious question need to be reassessed. Read more.