Marco Maccarini, the school organiser, and two of the participants tell us about the Giornate Didattiche school.

The 2013 edition of the Italian Giornate Didattiche neutron school supported by NMI3 was held between the 22nd of June and the 2nd of July. This school is organised every year by the Italian Neutron Scattering Society (SISN) and is aimed at university and PhD students and young researchers from diverse disciplines who wish to know more about the neutron scattering techniques available. The school is divided into two parts. In the first week participants go to scenic San Giovanni in Valle Aurina, Italy, for a theoretical-practical introduction to neutron scattering and available techniques; for the second part, the students move to the Institut Laue-Langevin in Grenoble, France, to perform practical experiments.

In the video, two of the participants tell us about the relevance of the school to their work. In the interview below, Marco Maccarini, the school organiser, tells us the story of the school and how it has developed to accommodate the students’ needs.

Inês Crespo: How and when did the idea to create the school come up? 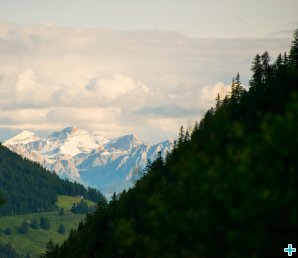 Giornate Didattiche 2013 Landscape in Italy. Picture courtesy of the organisers

GD 2013 – landscape in Italy. Picture courtesy of the organisers.

Marco Maccarini: SISN has been organising the Giornate Didattiche (GD) school since 2004. Until 2008, GD was a thematic school directed mainly at people with a background in neutron scattering. From 2009 onwards, SISN decided to change GD into an introductory school to neutron scattering, directed at people with little or no knowledge of the subject. The school also opened up to students with diverse scientific backgrounds such as physics, chemistry, biology, materials science, cultural heritage conservation, and others. The specific feature that characterises the school is the experimental part, which up to now has always been carried out at the Institut Laue-Langevin in Grenoble.

How do you decide for the school program?

The school program aims at covering most neutron scattering techniques. In the four days of the theoretical part the students learn about a different technique each day, including diffraction (1st day), small angle scattering and reflectometry (2nd day), quasi-elastic scattering (3rd day) and inelastic scattering (4th day). The students also take part in practical sessions in small groups where they can apply what they have just learnt.

Has the school program changed over the years?

Since we adopted the new format, at the end of the school we ask the students to reply to a questionnaire about GD. In the last years, the program has evolved following their suggestions as well as feedback from the teachers. Moreover, we have increased the range of experimental techniques addressed (e.g. reflectometry and spin-echo) both in the theoretical and the experimental sessions, in order to give the students as complete an overview as possible.

How are students selected?

Participants of Giornate Didattiche 2013 Picture courtesy of the organisers.

Participants of Giornate Didattiche 2013. Picture courtesy of the organisers.

We usually have more applications than places available, so we need to select the participants. When they apply, the students are asked about their motivation for attending the school and are chosen according to various criteria including the compatibility of their current career with the aims of the school. We also take into consideration the students’ affiliation, to avoid too many students coming from the same geographical area. Finally we try to approach a 50% female/male ratio of attendance.

What are the advantages of taking part in a school supported by NMI3?

NMI3’s support is very important; it offers the school extra funding for improving the logistics and organisation (especially mobility). In addition, thanks to NMI3, the school has become part of a European network of activities. The GD program can therefore be coordinated with participants from other European neutron and muon facilities.

Regarding the future, what are the plans for the school? 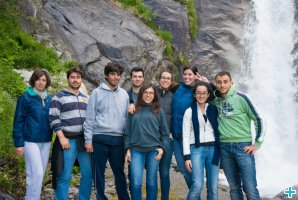 GD2013 participants enjoying the outdoors. Picture courtesy of the organisers.

We aim of consolidating the good results that we have obtained so far. For a couple of years now, SISN also launched a second-level school, which is a thematic school for PhD students who want to deepen their knowledge in neutron scattering. The idea is to cover all the neutron scattering techniques which have been sketched out during the GD school, over a three-year cycle. Our aim is to coordinate the two schools as best we can, to provide our students with an excellent basis for their future neutron scattering projects.

NMI3 thanks the ILL translation office.