Looking back – Interview with Robert McGreevy 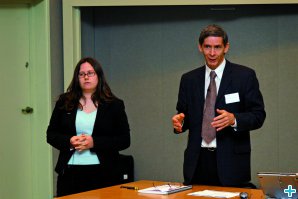 In an open-hearted interview, Robert McGreevy tells Juliette Savin about his experience as an architect of neutron and muon integration in Europe.

Robert McGreevy had been a proponent of the integration of European neutron facilities since the beginning of the 90´s. He was coordinator of NMI3 during the 6th EU Framework Programme (FP6). He has recently moved to the USA to become Deputy Associate Laboratory Director for Neutron Sciences at SNS, in Oak Ridge, Tennessee. Before joining SNS, Dr McGreevy had been division head at ISIS since 2002.

Juliette Savin: When you think back to the beginning, what was your main motivation for getting involved with NMI3?

Robert McGreevy: I have been involved in European projects and Access Programmes from very early on. I was possibly the first user of the first Access Programme at Risø in Denmark; later I became coordinator of the Access Programme at Studsvik in Sweden in FP4 and FP5. It was clear to me that smaller facilities like Risø and Studsvik couldn´t do everything on their own and needed European support. That´s one of the reasons I accepted to take on the I3 project, NMI3, at the beginning of FP6, in 2002.

Juliette Savin: Surely setting up NMI3 wasn´t all smooth sailing at the beginning; did the neutron community encounter difficulties?

Robert McGreevy: The concept of the I3s – Integrated Infrastructure Initiatives – had been building up, during three Framework Programmes and it was a very logical progression from the EU´s perspective. In FP5, the neutron round table had already started having a coordinating role and the facilities prioritized research and development projects together.

But with NMI3, suddenly everything had to be agreed, and of course this made things more complicated. But the neutron community was prepared, they had seen the I3s coming; they had even started preparing for the proposal two years before the call. They made a lot of effort to make sure smaller facilities were involved, as I said, having worked at a small facility myself, I realised this was very important.

Neutrons and muons had several advantages in the forming of an I3, because they are not such large communities and the facilities are not that many. The synchrotron community had a much harder time, for example, because there are many more of them.

Everyone agreed, among I3 coordinators, that setting up I3s was a lot of work, but that once an I3 was up and running, it had a lot of value.

Juliette Savin: What did you learn from your involvement with NMI3?

Robert McGreevy: Well, I know because I contributed to setting up and running NMI3 as a community, that the neutron community is actually very organised. People don´t realise it, it seems like it´s all complicated and a big mess, but actually, it is relatively coherent.

Juliette Savin: And why did you leave ISIS?

Robert McGreevy: I left ISIS because I thought it was time for a new challenge. In my career, I have always moved every ten years, and I needed something new again.

Juliette Savin: What do you like or dislike about living in the USA?

Robert McGreevy: I was born in the USA but I haven´t lived here in a long time. But life here is good, the climate is definitely better than in the UK, the countryside is beautiful and there is a lot of empty, open space. One thing that´s hard is that you can´t walk places, you have to take your car everywhere, and that´s new for me. Even crossing the street can be difficult! And I have to be careful when I say my name, people here don´t understand when I say Robert with a British accent, but if I say ‘rabbit’ it seems to work …

For more about NMI3´s History see our Timeline .