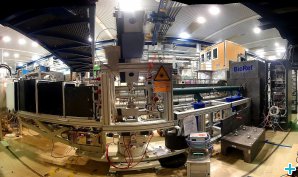 BioRef@HZB A fish-eye perspective of the new BioRef neutron reflectometer at the neutron source BERII at the Helmholtz Zentrum Berlin with the sample position in the center. The neutrons are guided through a chopper system from the right side and are detected with a position sensitive detector on the left side. As a special feature an infrared beam line is installed on the sample stage, with an infrared spectrometer on top, in order to perform combined infrared spectroscopy and neutron reflectivity measurements. The software "AutoStich 2.2" was used to merge 10 individual pictures of the instrument resulting in the final perspective. Photo, Martin Kreuzer, HZB

We are pleased to announce the winners of the 1st Illustrating NMI3 picture competition.

The first prize goes to Martin Kreuzer from Helmholtz Zentrum Berlin for his striking fish-eye photograph of the instrument BioRef at HZB.

His photograph will be displayed on the cover of the next issue of Inside NMI3, to be published in November.

There were three second prize winners of this first competition. The three pictures will be displayed inside the next issue of Inside NMI3 :

The third prize goes to Stephen Kill from ISIS for his photograph of students at the ISIS Muon Training School.

This picture will be used to illustrate the schools section on the new NMI3 website.

The new high-field muon spectrometer (HiFi) at ISIS provides magnetic fields up to 5T for muon studies of magnetism, molecular dynamics and polymer systems. Computer simulations of muon and positron paths through the instrument were undertaken with NMI3 JRA funding to enable the instrument detector array to be designed. The instrument is working very successfully as a full part of the ISIS user programme.