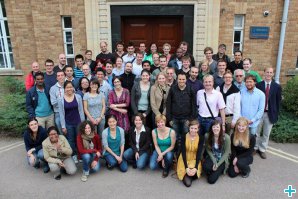 Last September saw the 12th running of the Oxford School on Neutron Scattering (OSNS). This school – which is financially supported by ISIS, the ILL and NMI3 – is the only European Neutron Scattering School which focuses on purely theoretical aspects of neutron scattering, and applications to scientific research. The OSNS welcomed 60 students from around the world (from as far afield as India, and Australia) including around 25 non-UK European students.

Week one of the school focused on basic theory of neutron scattering with core lectures from Andrew Boothroyd (Oxford University), Gerry Lander (ILL, Grenoble), Andrew Wills (UCL, London) and Ken Andersen (ESS, Lund). Additionally more general lectures, on “how to get your neutrons” (Andrew Harrison, ILL), and science communication (Martyn Bull, ISIS) were given in week one. In the 2nd week, more specialised applications were introduced, including Magnetism and Polarised Neutrons, Chemical, Biological and Engineering applications and Soft matter.

Each year the school holds the now famous Neutron Pub Quiz, where teams compete for coveted prizes by demonstrating their neutron knowledge! (not just scattering…). During the weekend of the school, the students visited the home of Terry Willis, the founder of the OSNS, and his wife Margaret. Tea and cakes were provided in abundance, as well as croquet on the lawn, and punting on the river Cherwell. The students were also shown round the old town of Oxford by Bill Spectre, who introduced the students to some of the spookier characters of Oxford (most of them no longer with us!). Towards the end of the school a gala dinner was held in St Anne’s College, with Terry and Margaret Willis as honoured guests. ISIS head, Andrew Taylor, and new STFC chief-executive, John Womersley were there to celebrate the end of another successful Oxford Neutron School, and to wish the students every success in their future careers in neutron science.