Science, tapas, t-shirts and M&M’s at the ECNS

NMI3 was at the European Conference on Neutron Scattering 2015

This year the European Conference on Neutron Scattering (ECNS 2015) was in Zaragoza and NMI3 was there. The conference started on August 30 with a welcome drink and a performance of typical folklore from the region, and finished on September 4 after five days of interesting talks and posters. The conference attracted nearly 600 delegates, coming from neutron research facilities as well as universities, including the directors of most European facilities. 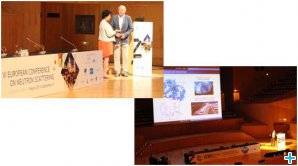 On the first day, Christiane Alba-Simionesco, who is the chair of the European Neutron Scattering Association (ENSA), announced that there will be a new prize for science and innovation to reward early career researchers.

ENSA has a long-standing culture of rewarding scientists for their work. On September 3rd the association gave the Walter Häg Award to H. Rauch for his outstanding and seminal contributions to the fundamental aspects of neutron physics and optics and many related aspects of quantum physics. And on the last day of the conference, G. Schiro received the Lewy Bertaut Prize for his scientific contribution at the highest level, excellent results, challenging experiments, and high impact publications in the innovative science field of protein dynamics.

The future of European neutron scattering

The conference was also an opportunity to call for action. Several national facilities will close by 2020, which will cause the overall neutron capacity in Europe to be greatly reduced. Design studies for new, cost effective and energy efficient, accelerator-based sources must be initiated now in order to rejuvenate the ecosystem of European facilities by 2025.

The conference was also the opportunity to announce the new ENSA brochure on Neutrons for science and technology. The brochure aims to illustrate all the great things neutrons can be used for and how neutron scattering is contributing to scientific advances in most research fields. NMI3 was involved in the preparation of the brochure and you can download a copy here.

Life at the NMI3 stand

NMI3 was one of the sponsors who contributed to keep the conference fees lower. We had a stand to advertise the project and received many visitors who wanted to know more about the project’s results, about the new project SINE2020, to play with us to win a t-shirt, and of course to eat some of our personalised M&M’s.

Thank you! And upcoming events

We would like to leave our thanks to the Spanish neutron scattering community for this great event, as well as to everyone from the organising committees. Thanks to them, everyone had a nice time in the welcoming city of Zaragoza. Conference delegates could even show their dance moves in a disco after the social dinner, and thus digest the multiple courses offered at the dinner.

The next big neutron scattering event will be the International Conference on Neutron Scattering on July 9-13, 2017, in Daejeon, Republic of Korea. ENSA is looking for an organiser of the ECNS 2019 and will thus launch a call very soon, after the next ENSA meeting in October. In the meanwhile you can have a look at the NMI3 and Neutronsources.org calendars for a comprehensive list of other neutron-related events like conferences, workshops, and schools.

ECNS2015: participant in the NMI3 competion

ECNS2015: participants in the NMI3 competion

The EC in Brussels formally adopted its decision to establish the European Spallation Source as a European Research Infrastructure Consortium, or ERIC. Read more