SANS: a unique technique to look inside plants’ leaves

Small-angle neutron scattering enabled researchers to look inside intact leaves to learn how their structure and functions change when submitted to environmental changes. 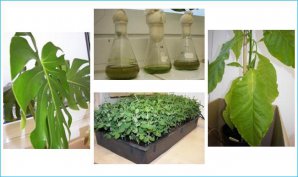 The leaves analysed at JCNS. Pictures courtesy of TUM.

Plants’ leaves capture the sunlight and convert it into energy used to produce nutrients for their activities. This process is accomplished thanks to the presence of the thylakoid membrane system. While it is known that changes in the environmental conditions affect the structure and functions of the thylakoid membranes, the nature and dynamics of those changes are not fully understood.

To deepen understanding in this matter, a group of scientists from Hungary, France, Germany and Switzerland cultivated tobacco and peas in a greenhouse and went to the local market to buy spinach and lettuce, counting a total of eleven different species.

SANS: Periodicity and light-induced changes in the ultrastructure of thylakoid membranes in higher plant leaves 2D SANS profile (left) of a D2O-infiltrated tobacco leaf and radially averaged curves (right) obtained during the onset of photosynthesis. Figure courtesy of Renáta Ünnep.

This was the first time SANS was used to look at whole leaves and the technique proved to be very suitable. SANS has the advantage to look at the structure and properties of leaves without damaging them. The technique provided unique information on the structure of the thylakoid membrane system in rather quick experiments that lasted less than a minute. Such short experiments can open the way to dynamic studies.

Results showed that when submitted to environmental changes such as different illumination, the organisation of thylakoid membranes changed significantly in the whole leaves.

NMI3 thanks Győző Garab for reviewing this article and Renáta Ünnep for providing the figures.

Egyptian statuettes of Osiris: production unveiled by neutrons and laser

A group of scientists from Italy, Germany and the United Kingdom applied an innovative approach to study Egyptian copper alloy figurines.

How to make train rails as straight as they should be

Scientists combine three different methods to better understand and predict the behaviour of materials in rails.

From ash to eco-friendly solution for hazardous metals removal

Scientists suggest a new method to transform power plant ash into materials that could be used for nuclear waste treatment or soil remediation.