Techniques and facilities where you can find them 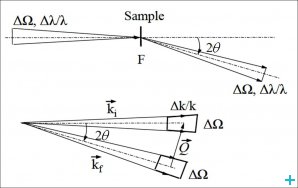 Elastic scattering with neutrons reveals structural information on the arrangement of atoms and magnetic moments in condensed matter.

On a mesoscopic scale, such arrangements may be macromolecules, self-assembles systems (such as polymeric micelles), colloids, porous systems, biological membranes, proteins, or biomolecular aggregates. Scattering delivers information about the size, the number density, and the correlation between the objects.

The information in such scattering experiments is contained in the neutron intensity measured as a function of the momentum transfer Q= Ki – Kf, Q=4π/λsin(θ) where Ki and Kf are the incoming and outgoing neutron wave vector, λ is the neutron wavelength and 2θ the scattering angle (Figure 1). 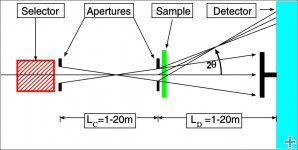 The principle layout of a conventional pin-hole SANS instrument is shown in Figure 3: a monochromatic neutron beam (neutron wavelength λ typically within the range 4.5Å to 20Å) is selected by a mechanical velocity selector from the continuous cold neutron spectrum delivered by the neutron source.

In the case of SANS the high intensity requests can only be achieved by using a large wavelength distribution, which is typically ∆λ/λ=10%÷20%.

The divergence, size and intensity of the beam sent to the sample is determined by an adaptive collimation system which consists of a set of mobile apertures allowing for the variation of the distance between the “entrance source” aperture (the first aperture after the velocity selector) and the “sample” aperture (fixed position in front of the sample) over a large interval, typically between 1m and 20m.

The scattered neutrons within a wide angular range, typically between 0.1° and 20°, are detected by varying the sample-to-detector distance between 1m and 20m. A large area position-sensitive detector with space resolution of about 0.5÷0.8 cm can detect about 90-95% of the scattered neutrons; because the detectors cannot typically handle the intense direct beams (an optimal sample transmission lies between 80%÷95%) these must be captured on a beam-stop made of neutron-absorbing material (10B, Cd). Occasionally, the beam-stop contains a small counter to determine the sample transmission, which otherwise must be measured with the large detector using beam attenuators (e.g. 10B glass) to reduce the direct beam intensity by several orders of magnitude.

SANS - Figure 4 The 40m pinhole SANS instrument KWS-2 of Jülich Centre for Neutron Science (JCNS) during the reconstruction at the Heinz Maier-Leibnitz neutron source (FRM II) in Garching; the end of the collimation base, the sample position and the long evacuated detection tube are visible. Photo:

An intensity-optimized setting of a SANS instrument is achieved if the collimation length equals the sample-to-detector distance. Therefore, the geometrically optimized SANS instruments have a typical length of 40m (Figure 4), reaching 80m for D11 at the ILL, Grenoble. Using neutron wavelengths between 4.5 and 20Å the Q interval between 7×10-4 Å-1 and 0.5Å-1 becomes accessible. 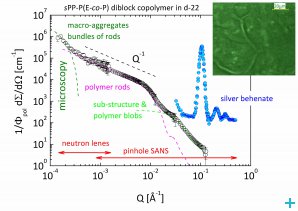 SANS - Figure 5 Scattering patterns from a complex hierarchical polymer morphology in solution (syndiotactic-Polypropylene-Poly(ethylene-propylene) diblock copolymer in decane) and the silver behenate measured at KWS-2 SANS instrument at FRM II; by the combination of the pinhole and lenses-focusing techniques up to four orders of magnitude on the length scale, between several Å and 1micron, can be explored at a single SANS instrument; by optical microscopythe structural investigation can be extended up to hundreds of microns. Picture courtesy of Aurel Radulescu FRM II/ TUM

In order to increase further the Q resolution towards smaller values, focusing optical elements need to be introduced. One possibility are the refractive optical elements (neutron lenses) placed in front of the sample such that the incoming neutron beam is focused on the detector and thus, smaller scattering angles than for conventional pinhole geometry are accessed. Neutron lenses are already in use at different SANS instruments worldwide. The use of MgF2 parabolic lenses in combination with a position-sensitive high-resolution (0.5mm) detector enables at KWS-2 SANS instrument operating at FRM II smallest Q vectors in the range of 10-4Å-1 (Figure 5).

SANS is thus a well-established, non-destructive method to examine structure on length scales of 1 to 1000nm. 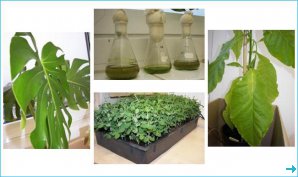 SANS: a unique technique to look inside plants’ leaves – click to read

SANS can be found at:

SANS - Figure 6 Example of contrast matching between regions of a diblock copolymer two-dimensional micelle (crystalline-amorphous core-brush morphology) and solvent: by modification of the solvent scattering length density surrounding the micelle the full contrast, core contrast and brush contrast (from left to right) can be adjusted. Picture courtesy of Aurel radulescu FRM II / TUM

A crucial feature of SANS that makes it particularly useful for synthetic macromolecules (soft matter) and biomaterials is the ability to vary the scattering contrasts between different constituents of a hydrocarbon sample over a broad range by H/D substitution. Since the molecules affected by H/D exchange are chemically the same, the physical chemistry of the sample is only marginally modified, if at all.

The technique of contrast variation and contrast matching (when “zero contrast”, ∆ρ=0, is achieved for one component) allow for highlighting parts of a structure and is of essential importance for the investigation of complex multi-component systems (Figure 6). 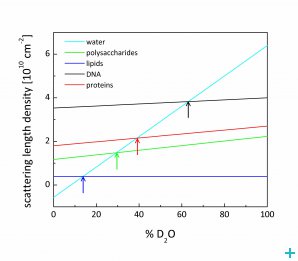 The exchange of hydrogen with deuterium either in the solvent or explicitly in chemical groups of the macromolecules of interest (labeling) is required. Deuterium labeling of synthetic (polymer) macromolecules is easily achieved by special synthesis methods. Although the synthesis of peptides using deuterated amino-acids or the separation of deuterated proteins from the organisms grown in heavy water cultures is possible, biological systems are not yet easy to label because of the complex and time consuming methods. However, contrast variation of bio-macromolecules takes the advantage of the fact that the major bio-macromolecular constituents have mean scattering length densities that are distinct and lie between the values for D2O and H2O. An appropriate mixture of D2O and H2O can contrast match almost any biological molecule (Figure 7). 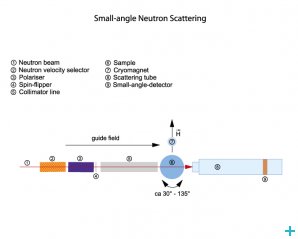 SANS experiments with polarised neutrons provide more detailed information about magnetic properties. The contrast variation by magnetic scattering in this case is enabled by manipulating the neutron spin and the magnetic field on the sample. For this purpose, the SANS instrument are equipped with special experimental tools, i.e. polariser, spin flipper and magnetic guide field (Figure 8).

Polarised SANS can be found at:

D11 at ILL is the archetype of a long, pinhole geometry instrument for small-angle neutron scattering (SANS), designed for the study of large scale structures in chemistry, biology and solid state physics. Watch an animation of D11 by clicking on the image