The aim of this JRA is the development of new detector technologies based on Gaseous Scintillation Proportional Counters (GSPC). These devices have the potential of improving the performance of high position resolution detectors used in reflectometry and time resolved SANS. Present state of the art detectors, such as 3He-based Multi Wire Proportion Chambers already limit the performance of existing reflectometers due to their moderate count rate capability. They only provide limited spatial resolution of x ~1-2 mm and a time resolution in the microsecond range. More advanced devices based on solid 6Li doped glass scintillators with Anger camera readout, e.g. as recently developed at the SNS, can partially improve the performance achieving high position resolution (~1mm) and providing good timing resolution due to the fast scintillation light pulse with a duration of about 200 ns. The low light output of 6Li glass however, diminishes the count rate capability due to the signal integration time required. A major drawback of 6Li based glass scintillation detectors is a non negligible sensitivity to a high gamma background environment.

Micro pattern charge amplifying structures like MSGCs have been shown to be very efficient in the production of fast scintillation light in the visible region when operated in the proportional mode in gas mixtures of 3He-CF4. Photon yields per detected neutron can be ~100 times larger than that of 6Li-glass and light signal durations of less than 60 ns have been observed. In the proposed JRA particular emphasis is therefore placed on the development and study of new technologies based on these Gaseous Scintillation Proportional Counters with light readout. The application of this new technology in neutron detection could enable the design of neutron counting detectors with superior performance that exhibit a high count rate capability of up to 10 MHz, a high spatial resolution (~1 mm) and a low gamma sensitivity on a par with gaseous detectors. 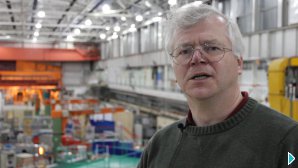 Nigel Rhodes, Davide Raspino and Erik Schooneveld from the Detector group at ISIS describe their work as part of the JRA. 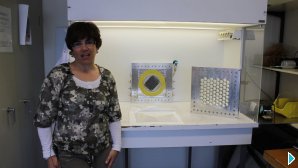 Watch Giuliana Manzin, from ILL in France describe the GSPC detector she has been working on. 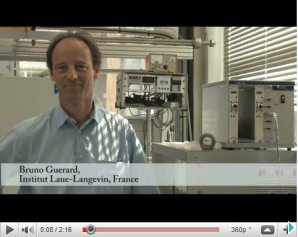 Bruno Guerard and the MILAND project

In this short film, Bruno Guerard from ILL presents the MILAND detector, developed under as part of the MILAND JRA under FP6.