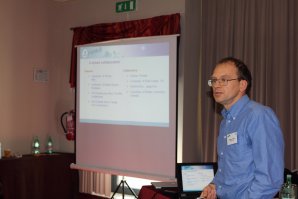 STFC, as co-ordinator, seeks to undertake management and co-ordination activities. This will include stimulation of twelve monthly JRA partner meetings, preparation of all required reports, maintenance of a Muon JRA website including reports, meeting notes, technical documents, etc, publicising the muon JRA within the wider NMI3 consortium, and budget management. In addition to the formal JRA meetings, there will be regular informal contact between partners to discuss JRA work.

Summary: This task area aims to develop state of the art data reduction methods applicable to new applications of the muon technique in subject areas such as soft matter, semiconducting materials and radical chemistry. The recent development of complex experimental methods (such as high field, laser, RF and gas phase studies) has highlighted the important role that simulation now plays in data analysis, and tools to combine instrument simulation (developed during previous JRAs) with analysis will be developed. Improved data formats, particularly including advanced metadata, will be devised to underpin the new analysis techniques.

Summary: This task area will take a forward look at the next generation muon sources, instrumentation and user requirements (such as specialised sample environment), using simulation to develop preliminary design studies as to how these might be realised. Work is likely to be focussed in two areas: firstly, to evaluate how novel muon-beam facilities might be realised and their impact on the scientific community, and secondly, to consider how high intensity muon sources might be implemented and consider the associated scientific benefits.

Summary: This task area will involve collaborative work to characterise a prototype detector bank based on Geiger-mode Avalanche Photo Diodes (APD) for the ISIS High Field Instrument. APD technology was developed by PSI during previous JRAs for continuous muon beams, and the aim of this task is both technology transfer and innovation to enable its application to the pulsed beams at ISIS. The prototype bank will be designed to function as both a longitudinal and transverse array, and in the latter configuration RF experiments will be performed to evaluate its timing resolution.