Polarised neutrons are particles with a preferential spin direction or magnetic moment and can be considered as the arrows of an elementary magnet. Similarly to classic magnet arrows placed in a magnetic field, their spin direction change when interacting with a magnetic dipolar field in the sample. These changes in the relative orientation can be measured very precisely using neutron polarimeters. Furthermore, the precession around the magnetic field’s direction allows the attachment of a “Larmor clock”, whose rotation speed depends only on the magnitude of the magnetic field of each neutron. Given that each neutron carries its own Larmor clock, the neutrons in the beam become distinguishable. This opens the possibility of developing unusual neutron scattering techniques, whose resolution does not require pre-defined initial and final states. Thus we can achieve an extremely high energy (or momentum) resolution that is not achievable in conventional neutron spectroscopy (or diffraction) because of intolerable intensity losses. This JRA aimed to develop an easily accessible wide-angle polarisation analysis technique for neutron diffraction/spectroscopy, and to extend the possibilities of Larmor labelling methods towards higher energy and momentum resolution. In this article we present only a few achievements of the Polarised Neutrons JRA. For a complete coverage please consult the final report.

Large solid angle neutron polarimetry will allow the use of large solid angle detectors, which enable simultaneous data acquisition over a wide range of transferred momentum. This results in an enormous efficiency gain for neutron polarimetric experiments and opens new horizons for more detailed understanding of the mechanisms involved in multiferroic compounds, photo induced and molecular magnets, magnetic nanostructures, spin electronic and new superconductors, which are at the forefront of condensed matter research.
Within this task, we performed a detailed analysis of the different possibilities for the wide-angle analyser at the Super 6T2 diffractometer at LLB. We found that existing solutions employing the radial array of polarising supermirror (SM) analysers compete with similar devices based on 3He spin filters only for long wavelengths. This considerably limits the application of SM analysers in single crystal diffraction and clearly favours the polarised 3He technique for single crystal diffraction applications. This technique is based upon the strong spin dependent neutron absorption of the highly polarised 3He gas, which makes it an effective neutron spin filter: it is transparent for neutrons with one spin direction and opaque for neutrons with the opposite spin direction. In the frame of the JRA, FZJ developed a very compact 70cm diameter magnetic system capable of producing a uniform field in three orthogonal directions over a very large solid angle (fig 1). The team also developed a pioneer method for manufacturing doughnut-like containers for 3He gas from the dedicated GE180 glass. 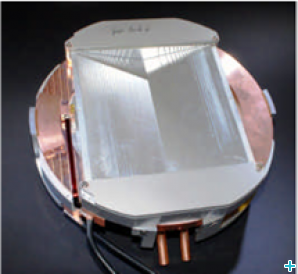 Neutrons can be used to study dynamics on a molecular scale by measuring the neutrons’ energy gain or loss during the sample analysis. Examples of these studies are the determination of lithium diffusion through a battery system or hydrogen transport through a fuel cell. Current instruments pre-select the incoming neutrons’ energy, losing more than 95% of the available neutrons, and determine the scattered-neutron’s energy by the time-of-flight (TOF) technique. A new TOFLAR technique, proposed in TU Delft, will use the whole neutron spectrum and determine the neutrons’ energy by a modulation technique. By combining Larmor labelling and the TOF technique we will have a quasi-elastic neutron-scattering instrument with high neutron intensity and large accessible range of length and time scales on the molecular level. Within this task, the team of TU Delft has described the theoretical background, performed computer simulations, and a proof-of-principle experiment on a prototype instrument at the Reactor Institute Delft.

Neutron spin-echo spectroscopy is a method to analyse slow motions and relaxations on the length scale of atoms, molecules and molecular aggregates. In particular in soft-matter such as polymers, proteins and microemulsions, the combination of neutron diffraction (SANS) and spectroscopy with contrast generation by selective replacement of H-atoms by deuterium provides insight into the structure and mobility of these systems. The neutron spin-echo spectrometer has a unique resolution capable of detecting very small changes in the velocity of the scattered neutrons, about three orders of magnitude higher than that of any other neutron spectroscopic method. To further improve the resolution and the transmission of neutron-spin echo spectrometers, the team from FZJ has developed new correction elements that have a good transparency to neutrons and at the same time can withstand the large currents that are necessary to perform the correction. The challenge here was to combine good neutron transmission with high current density and a highly accurate distribution of electric current that is responsible for the corrective action. We have adopted an idea already employed at ILL for elements with smaller area and extended it to larger diameter and current density. These so-called “Pythagoras coils” consist of crossed current wedges (fig 2). Their combined action resembles that of a radial distribution. Despite the fact that their theoretical performance is somewhat non-ideal, they meet the theoretical expectation and they are the best performing correction elements that could be obtained up to now. Following this, we have produced a new design for the complete set of coils for the spin-echo spectrometer J-NSE in Garching, Germany, and the SNS-NSE at the JCNS outstation in Oak Ridge.

Monte Carlo simulations are playing a very important role in the context of the design and optimisation of neutron scattering instrumentation. An accurate, carefully benchmarked computational model of a neutron instrument can underpin the design of new instruments and enhance the efficiency of existing ones. This makes the development of powerful Monte Carlo instrument simulation codes very important for the progress of neutron scattering research. A team at FZJ, in collaboration with the Joint Institute for Nuclear Research in Dubna, Russia, has extended the possibilities of the simulation software package VITESS allowing the simulation of spin dynamics in time-dependent magnetic fields. This paved the way for simulations of practically all existing spin-handling devices and Larmor-labelling neutron scattering instruments.

The aim of this task was to design, develop and construct Large Solid Angle (LSA) coils for a neutron resonance spin echo spectrometer. In a first phase, we used two flat LSA coils for the primary spectrometer, each of them including two radiofrequency coils inserted in static coils (fig 3 left). For the secondary spectrometer, in order to achieve a measurement over a very wide angle, a curved coil has been developed with the aim of simultaneously covering 15° of the scattering angle (fig 3 right). In another approach developed at TUM, the curved coils are not winded to a body, but cut from a single aluminium piece by means of electrical discharge machining. The coil design and the construction were performed at LLB and TUM and the test has been carried out on the spin echo spectrometer G1bis at LLB.

Nowadays neutron experiments can determine the mutual position of two scattering objects in the sample: the distance between these objects is the length scale at which we probe the sample (the so-called pair correlation function). However, through the Neutron Resonance Spin Echo (NRSE) technique, one can split the initial neutron wave into four waves corresponding to three different distances so that the neutron waves probe the sample simultaneously on three length scales. The detected intensity will now depend on distances between three scattering objects in the sample (so-called triplet correlation function). The prototype setups for the Four-Wave NRSE experiments and Spin-Echo Small Angle Neutron Scattering (SESANS) have been built at the reactor of PNPI, in Gatchina, Russia. 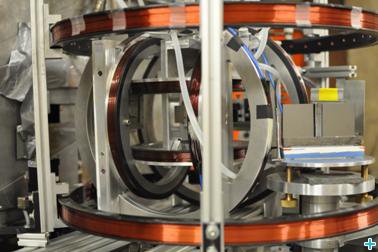 The characterisation of the magnetic structure of matter and the study of its evolution under varying external conditions is a particular strength of neutron research. A new option for investigating the magnetic microstructure is the Ultra-Small-Angle Polarised Neutron Scattering technique (USANSPOL), which relies on the high resolution of scattering angles provided by perfect crystal neutron reflection. ILL has set up an instrument configuration for this (fig 4). The instrument was equipped with magnetic prisms for neutron polarisation and a dedicated sample environment. The sample environment provides 3D control of an external magnetic field configuration ranging from a zero-field environment via continuous intermediate setups to the magnetic saturation of the samples. In addition, this sample environment enables us to apply external mechanical forces for the study of magnetostriction in novel technologically relevant materials used in modern sensors and actuators. Our test experiments demonstrated the potential of this new technique. It offers a picture of the structure that may be related to material functionality and may eventually lead to technological improvement. 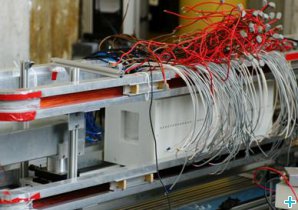 The spectral and temporal tailoring of neutron beams is an important issue for advanced neutron sources like the European Spallation Source. Spatial magnetic neutron spin resonance as the basis for the famous Drabkin-resonator demonstrated its potential for defining the spectrum of a polarised neutron beam as early as the 1960s. With the novel idea of controlling each element of the neutron resonator separately, a concept was invented that allows for polarised neutron beam tailoring of unprecedented flexibility regarding key parameters like incident and final neutron energy, spectral width of the incoming beam, or its energy resolution. We have built two prototype resonators based on the same principle and tested them experimentally at a polarised neutron beam line at the Atominstitut TRIGA reactor of the Vienna University of Technology (fig 5). The experiments demonstrated a flexible spectral definition of the neutron beam with variable resolution in continuously operated mode, applicable in diffraction and fundamental physics experiments. For the first time, the team also performed a travelling wave mode of operation where short neutron pulses in the microsecond range are produced by synchronised magnetic field pulses. This offers new possibilities for neutron spectroscopy as it decouples the energy resolution from the TOF resolution of the neutron beam. In addition, a Ramsey-type resonator setup was conceived and tested which offers promising potential for advanced neutron spectroscopy techniques.

In the past, neutron polarisation experiments were considered delicate, difficult to understand, and often too costly in flux. The work carried out within this JRA has clearly extended the power of polarised neutron scattering for delicate experiments investigating the nature of magnetism and magnetic phenomena in solids. Much can still be done to enhance polarised neutron techniques. We will now take time to reflect on the work developed over the past 10 years, but we believe that the possibility of forming a new Polarised Neutrons JRA in the future cannot be discarded.