Europe is fortunate in having two muon sources that are complementary and together offer researchers access to the full range of μSR spectroscopic methods. The μSR technique is remarkably diverse, encompassing studies of magnetism, superconductivity and spin and charge transport, while providing a highly sensitive hydrogen analogue to probe semiconductors and proton conductors. The technique has an important role beyond condensed matter physics, offering chemists a valuable method of investigating the fundaments of reaction kinetics while enabling the study of organic radical structure and dynamics in solids, liquids and gases. The beam structure of the SμS, located at the Paul Scherrer Institute in Switzerland, makes it ideally suited for applications where high timing resolution is essential for following fast muon precession or rapid spin depolarisation. In contrast, the pulsed nature of the ISIS beam, operated by the Science and Technology Facilities Council in the UK, enables low background time differential data to be captured at high data rates, while enabling the effect of beam synchronous stimuli (such as Radio Frequency or laser radiation) to be easily investigated. For both facilities, the development of new instruments for high field spectroscopy was seen as vital for providing the user community with the tools necessary for future research.

Making use of High Magnetic Fields

The availability of high magnetic fields is advantageous as new µSR measurement techniques and regimes become accessible to the scientist:

Knight shift
Studied by applying a field perpendicular to the muon polarisation to reveal fast spin precession around the total field at the muon site, the muon Knight shift is obtained after correcting for contributions from demagnetisation and the Lorentz field. This quantity, similar to the NMR Knight shift, is directly dependent on the local magnetic suceptibility at the muon site and, therefore, allows the muon to probe the magnetisation distribution inside a sample.

Fluctuations and Correlations
Muons can be used to study fluctuations in the local magnetic field. These fluctuations can arise either from the intrinsic spin dynamics of a particular magnetic system or from dynamical processes associated with molecular motion, or in some cases with the diffusion of the muon itself. By applying a field parallel to the muon polarisation the spectral density of the field fluctations can be mapped and correlation times down to ~ 0.1ns defined.

Spectroscopic Studies
Spin precession, level crossing resonance and radio frequency techniques combine to provide a suite of tools for studying muoniated organic radical systems where the radical has been formed by muonium (an exotic atom made up of a muon and electron) undergoing the equivalent of an hydrogenation reaction. Hyperfine parameters in solids, liquids and gases can be investigated, and final state spectroscopy opens up the possibility of studying reaction kinetics.

Molecular Dynamics
In muoniated organic radicals the greater moment of the associated electron spin extends the dynamic range enabling correlation times down to ~ 1ps to be explored, overlapping and complementing QENS. The field dependence of relaxation rate is now complicated by the contribution of different hyperfine transitions, but this in turn allows different modes of inter and intra-molecular motion to be distinguished.

High Field Developments at the SμS

The spectrometer at the SμS (shown left) is optimised for measurements where the 9.5T field is perpendicular to the muon spin polarisation, and sample temperatures as low as 25mK are available. The instrument is currently being commissioned, with test experiments confirming excellent performance through the measurement of full amplitude spin precession signals at approximately 1.29GHz in the 9.5T field. First user experiments are planned during 2012. 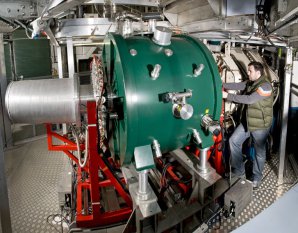 The ISIS instrument (shown right) provides a 5T field parallel to the muon spin polarisation and offers a sample environment covering temperatures between 25mK and 1200K. A detailed description of the instrument and its commissioning has been published (Lord et al, Rev. Sci. Inst. 2011 82 073904). The scientific programme is developing rapidly, with groups using the spectrometer for studies including magnetism, superconductiviy, molecular dynamics and polymer systems. The instrument is fully integrated into the ISIS user programme and groups can apply for beam time using the ISIS Online Proposal System

Muonsources.org is an initiative of muon research facilities and muon communities around the world, and is coordinated by NMI3. The aim of the website is to provide information material and news on research using muon beams.