Application of Neutrons and Synchrotron Radiation in Engineering Materials Science

The fifth session of the bi-annual Helmholtz-Zentrum Geesthacht (HZG) Autumn School was between October 7 and 11 and attracted 60 participants who were interested to receive an overview on the application of neutron and synchrotron radiation in the structural analysis of materials. The venue of the three-day theoretical course was the conference centre “Haus am Schüberg” in Ammersbek, north from Hamburg, and the two days of practicals were held at DESY, the German Electron Synchrotron. In between everyone could enjoy a boat trip in Hamburg. Thanks to NMI3 a number of foreign participants received support to attend the school.

Martin Müller is the head of the department “Structural Research on New Materials” that operates the instruments of the HZG at DESY and at the Heinz Maier-Leibnitz Zentrum (MLZ). Together with Andreas Schreyer, he is responsible for the local organisation of the HZG autumn school. Martin told us all about the school’s history, how the programme is planned, how participants are selected, and future plans for the school.

Learning about neutrons and photons 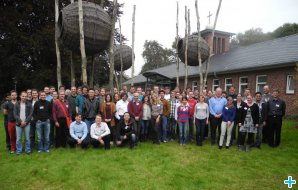 Neutrons and synchrotron radiation are complementary probes to investigate the structure and properties of materials. This school combines them and the organisers make their best efforts to have a balanced programme between these two techniques and to define the best applications to one or the other.

The first edition of this school was in 2005. By then it was organised by a Virtual Institute of the Helmholtz Association, with research centres and a number of universities participating. From the beginning, the school has focused on the use of neutrons and photons in engineering materials science. A few years later, the Helmholtz-Zentrum Geesthacht started two different collaborations that address specific fields of materials science – within the Röntgen-Ångström-Cluster and in the Virtual Institute “New X-ray Analytic Methods in Material Science” (VI-NXMM). Thus, in 2013 emphasis was laid on the respective aspects of energy research in engineering materials science and of novel X-ray optics for imaging applications.

The school programme is in continuous change. For each edition, institutes as parts of these collaborations suggest relevant themes and speakers to give lectures in the school, ensuring that the students learn about the most up-to-date science. Moreover once participants are selected the organisers make their best efforts to adapt the school programme to the students’ backgrounds and interests. The programme therefore always includes lectures on the basics of neutron and synchrotron radiation and also lectures and case-studies on specific applications relevant to the attendees.

A big effort is made to ensure that participants learn the necessary theory before moving to the laboratory. Copies of all the lectures are actually printed out and distributed to all participants in the beginning of the course to facilitate the learning process. The book Neutrons and Synchrotron Radiation in Engineering Materials Science, which has resulted from previous autumn schools with the same title, is also offered. 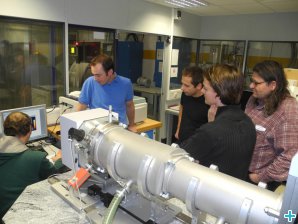 In the first years the school practicals were held at HZG where students could do experiments on neutron scattering instruments. In 2011, after the shut-down of the HZG reactor in 2010, they moved to DESY to receive tutorials on practical experiments. The 2013 edition was the first time participants conducted “real” synchrotron experiments. They could apply what they learned during the lectures in three experiments that they selected according to their preferences out of the eight available. Neutron scientists were also present to show small-angle neutron scattering data to the students and teach them how to analyse it. The students were very positive to engage with scientists for the two full days they spent in the lab. To learn further about synchrotron science they had the opportunity to take a guided tour to DESY.

To apply to the school, interested people sent a CV to the school organisers who reviewed the participants’ background. This year participants were coming from varied research fields such as dentistry, materials science, physics, and biology. The majority were PhD students, but there were also PostDoc researchers and a number of master students. In the video above participants tell us about their experience in the school.

According to Martin Müller, the funding provided by NMI3 is crucial to cover expenses of participants coming from abroad. It contributes to keep attendance levels high and it has guaranteed that no registrations had to be declined for financial reasons over the past eight years. NMI3 and NaMES (Neutron and Muon European Schools ) play an important role in the promotion of the school among potential participants who thus can select from a portfolio of schools in this field according to their needs. 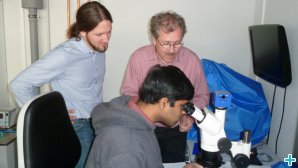 Feedback from participants of the HZG school is very positive! The balance and structure currently used between theoretical and practical classes seems to be very successful and will be kept in the future. Regarding the practicals, the organisers will discuss whether to move to the HZG outstation at MLZ in Garching so that students can perform neutron scattering experiments. As done for the 2013 school, future collaborations and projects will be considered to decide on the programme; for instance, HZG is part of a European project on novel materials for medical implants whose participants showed interest in attending.

Neutrons and photons are valuable to investigate materials used in a myriad of research fields, and this school will continue playing an important role in educating scientists about these techniques.

Pictures of the 2013 HZG Autumn School

Students analysing the results of an experiment at DESY. Picture: Peter Staron, HZG.

Learning how to analyse the results at DESY. Picture: Peter Staron, HZG.