The proton accelerator at the Paul Scherrer Institute: 40 years of top-flight research

The proton accelerator at the Paul Scherrer Institute (PSI) in Switzerland, which is one of the NMI3 partner facilities, is celebrating its 40th anniversary. 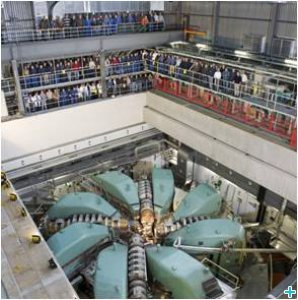 The PSI’s large proton accelerator. The photo was taken in 2010 when the roof shielding had completely been removed. Members of staff working at the facility are visible in the gallery. Photo: Paul Scherrer Institute/Markus Fischer

Materials research, particle physics, molecular biology, archaeology – for the last forty years, the Paul Scherrer Institute ’s large-scale proton accelerator has made top-flight research possible in a number of different fields. Initially, it was supposed to help clarify issues in particle physics by producing pions. Later, the facilities around the accelerator were expanded so that its proton beam could also be used to generate neutrons and muons for a wide range of experiments – frequently in research fields that nobody had even considered during the construction of the plant.

Today, about twenty experiments can take place simultaneously there, many of which are conducted by external researchers who are looking to use the partly unique research possibilities. The results often attract interest worldwide. The constant refinement of the accelerator was crucial for the expansion of the facilities, enabling the proton current to be increased twenty-four-fold over the four decades. The PSI’s large proton accelerator currently delivers the most powerful proton beam in the world. The experience that the researchers and engineers at the PSI have gained at the facility also formed the basis for the development of proton therapy, which has already been used to treat several thousand cancer patients successfully at the PSI.

To read the full review by Paul Piwnicki you can go to: http://psi.ch/FZwW

Experiments at PSI supported by NMI3