ISIS is the world's most intense source of pulsed muons for condensed matter research. 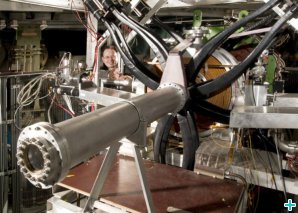 Spin-polarised muons are generated at ISIS by collisions between the proton beam and a thin carbon target. For condensed matter studies, positive muons are implanted into materials and the time-evolution of the muon polarisation is observed. Highlights of work using ISIS muons include the discovery of shallow donor hydrogen states in semiconductors; characterisation of correlations in spin-glass materials and investigation of spin dynamics in frustrated systems; charge-carrier motion studies in conducting polymers; characterisation of flux line lattice behaviour in organic superconductors; study of the interplay between magnetism and superconductivity in high-temperature superconductors; and investigation of quantum tunnelling of light particles.

The RIKEN-RAL muon facility supports a wide range of muon investigations. In addition to condensed matter studies, there is ongoing work into the physics of muon catalysed fusion, which occurs in deuterium-tritium mixtures when negative muons take the place of electrons in the hydrogen atom isotopes. There are also experiments using negative muons to measure nuclear charge distributions, together with development of low-energy muon beams.
Expertise

Muon group members have a wide variety of expertise in condensed matter, molecular and chemical systems and the use of the muon technique to provide atomic-level information in these areas. Specific examples include studies of organic and inorganic magnetism, modeling hydrogen behaviour in semiconductors, free-radical chemistry, ionic conduction, high temperature superconductivity (including atomic-level investigations and flux-line lattice studies), and muon technique development including a variety of pulsed environments for muon experiments.