ISIS: Making Muons for a quarter of a century

To mark the publication of a special edition of Physica Scripta, ISIS muons for materials and molecular sciences, ISIS looks back on the last 25 years of muons and their achievements. 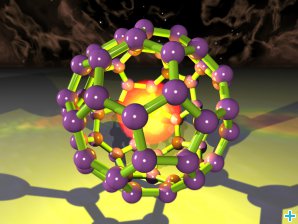 Muonium atom trapped inside a buckyball

Throughout its history, a steady stream of developments have polished and refined the ISIS muon facility in to a flourishing research centre in which the scope of muon science has expanded, enabling landmark discoveries. Muons can detect information at the atomic level – from sensing superconductivity and magnetism to the study of polymers and chemical reaction dynamics.

In 1987 the ISIS Muon facility was born, with the development and manufacture of the first of its muon instruments, MuSR, as part of a collaboration with the European Community. This single beamline, home to our first muon spectrometer, saw its first muons on the 23rd March and offered a broad science programme, with applications in materials science, condensed mater physics and chemistry. However with the demand for beamtime ever increasing, this instrument was to become the just the tip of the iceberg.

1993, thanks to a further grant from the EC, saw the emergence of a triple beamline facility hosting three experimental areas. Two new muon instruments entered the scene; EMU, a spectrometer designed to complement MUSR, and DEVA, initially only used for large experimental setups but later, with additional funding from the EPSRC, DEVA became a dedicated machine for RF and µSR measurements. These set of instruments formed the European Muon Facility.

In the 1990’s construction began for a new complex for muon research at ISIS, as the result of an international collaboration between Japan and the UK. This new RIKEN-RAL facility was completed in 1996, with the ability to produce positive as well as negative muons and offering four unique experiment ports open to researchers from Japan, the UK and other countries. 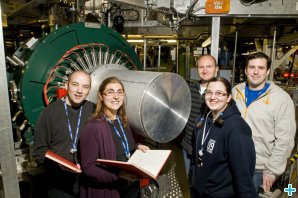 Since then the two muon facilities have constantly evolved and been upgraded in order to keep at the cutting edge of muon science; in 2005 a major development grant from the STFC was used to build a new instrument, HIFI, which joined the squad, replacing DEVA. This latest addition to the instrument suite opens up new possibilities for muon studies, with its high field range of 5T, the capabilities for measurements of fluctuations; dynamics and diffusion have been improved.

“Currently our biggest project is the upgrade to our primary beamline. This should double our muon rate. Another development this year is the installation of a new laser system into HIFI which is nearing completion. This will be a very powerful laser and that will enable us to stimulate the sample at the same time as the muons are coming in” Adrian Hillier, leader of the Muon Group. 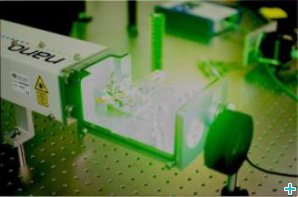 HIFI at ISIS The HiFi laser, shooting into a power meter.

The HiFi laser, shooting into a power meter.

“Using the new laser system we will be able to perform laser excited muon spectroscopy on materials using HIFI. The introduction of this laser system on HIFI will increase the magnetic field size available expanding the science that we can do, specifically the wealth of science about electron dynamics in soft matter systems” Alan Drew, Queen Mary University.

Today the Muon facility at ISIS hosts a vast user community with some users using both neutrons and muons as complementary tools for their research. But what is a muon? And what can it do?

You can think of muons as tiny undercover agents, exploring a place we can’t normally reach and sending us details about what’s going on. In this way Muons are like a fly on the wall, sitting amongst the atoms in a sample they can detect how the atoms are moving. Like electrons and positrons muons can be positive or negative. Positive muons have their own spin and this can help us to find out some of the characteristics of materials by measuring the time dependent change in muon spin. This is called muon spin rotation, relaxation and resonance. Negative muons, on the other hand, are captured into the orbits of nuclei and can measure nuclear charge distributions.

The idea of a muon can feel a little alien – we’re used to hearing about particles like electrons, protons and neutrons, which inhabit the atom. So where do muons come from?

Adrian Hiller explains, “A muon is a fundamental particle and we create them by using a high energy proton beam which goes into a carbon target that creates pions; those pions decay into muons and we transport those round to the beamline. Muons have a charge and spin; we can use that for the transportation. It’s the spin that we use in the process that interacts with the material we are interested in.”

Muons are a short lived probe and only stick around for two millionths of a second, decaying into positrons soon after they stop in the sample. However this very brief encounter is long enough for the muons to get an idea of what the atoms are doing. Muons are different to neutrons in this way – muons stop in a sample – they are not reflected or diffracted. Instead positrons that are emitted in the direction of the muon spin are monitored to enable the position in the crystal lattice or molecule to be determined.

Over the last 25 years the range of research possible using muons has widened, muons are able to explore many different materials from superconductors to magnetic semi-conductors; they have also been used for polymers, DNA, battery materials and gases.

“Muon science at ISIS has always been at the forefront of topical condensed matter research and addresses battery materials, chemical kinetics, spintronics, organic polymers, high temperature superconductors and catalysts. Recently we have been doing some electronic component muon irradiation – this example is not actually using the traditional MuSR technique, but instead taking the muons you create and seeing what the damage is to the electronics. We can also do quite a bit of chemistry with muons, looking at reaction kinetics.“Adrian Hillier, ISIS.

Every two years ISIS runs a practical training course on how to use muons as a research tool. These include a variety of lectures and workshops on the muon technique given by experienced researchers, and also the chance to perform muon experiments. The next Muon training course will be held in May next year for PhD students and new researchers. There will be NMI3 grants available for international students.

You can read more about some of the Muon science at ISIS here: