Experiments in millionths of a second

Muons – unstable elementary particles – provide scientists with important insights into the structure of matter. They provide information about processes in modern materials, about the properties of elementary particles and the nature of our physical world. Many muon experiments are only possible at the Paul Scherrer Institute because of the unique intense muon beams available there.

An abundance of muons 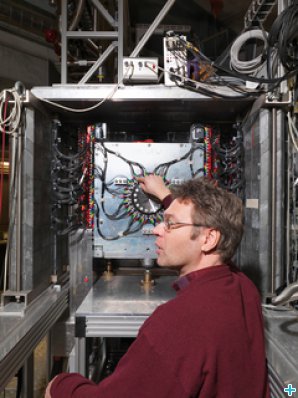 Muon experiment at PSI Thomas Prokscha at the experiment to study matter using slow muons. The photograph shows the detector in which particles from muon decay are detected.

Thomas Prokscha at the experiment to study matter using slow muons. The photograph shows the detector in which particles from muon decay are detected. (Photo Scanderbeg Sauer Photography)

In principle the world could not be simpler, as it only takes three fundamental types of building blocks to create everything: neutrons and protons, which form atomic nuclei, and the electrons that surround them and ensure that atoms bind together. All elements are made-up in this way – be it hydrogen, oxygen or gold and from these, everything else is derived: we ourselves and everything that surrounds us. However, in reality our world is not quite so simple; there are a host of other particles around. Amongst these the muon – in a sense the heavier brother of the electron, some 200 times more massive, but in all other respects, very similar. Despite its similarity, it is totally unsuitable as a building block – since as soon as it is created, it decays into other particles. On average a muon survives only 2 millionths of a second. Despite this, it is far from being useless: it is in fact a superb tool for scientific research.

As early as the 1940s, scientists used muons as tiny clocks to test an important aspect of Einstein’s Theory of Special Relativity, by using the muons that constantly rain down on us from the skies. These are formed when fast protons from outer space collide with the nuclei of air molecules in the Earth’s atmosphere. 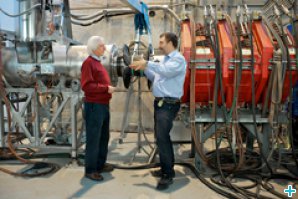 Experiment on muon decay at PSI PSI-scientists Peter-Raymond Kettle (left) and Stefan Ritt in front of the beam tube, through which muons are sent to the experiment

Experiment on muon decay: PSI-scientists Peter-Raymond Kettle (left) and Stefan Ritt in front of the beam tube, through which muons are sent to the experiment (Photo: Markus Fischer/PSI)

PSI scientists, in contrast, use muons to investigate the structure of matter – the properties of particles as well as the processes occurring in the interior of complex materials. But for this purpose, the number of muons falling from the skies is not sufficient. The scientists need many, many more muons to be able to repeat their measurements with millions upon millions of muons to so collect sufficient data to give a precise result. Muons are produced at PSI in very violent collisions, involving fast protons extracted from the main particle accelerator which then collide with a rotating carbon ring target; amongst the new particles created from these collisions are muons, which can then be used for experiments. This results in the most intense muon beams in the world. Scientist so take great pleasure in the fact that measurements can be carried out within a realistic time frame, with a new muon being reliably produced when its predecessor has just decayed. This is why world-wide some experiments are only possible at PSI.

Scientists at PSI’s Laboratory for Muon Spin Spectroscopy use muons to study the magnetic fields inside materials. Magnetism plays a key role in many materials, for example, as in some superconductors, which conduct electrical currents without loss. “One still doesn’t know precisely how superconductivity arises in so-called high temperature superconductors. It is clear that magnetism plays a crucial role, and so muon research can make a contribution towards solving the puzzle”, says Rustem Khasanov, one of the muon scientists at PSI.

One of the current topics of research is of materials made up of several layers of various substances – each layer being fractions of a millimetre thick. These often have unexpected properties that can be exploited, for example, in electronics: thus the tiny hard drives in an iPod can only be produced because the reading heads are constructed from such multi-layered materials. In their experiments, scientists aim to study the individual layers separately. This is rather difficult, when one considers that the muons are ‘shot’ into the material and have to stop in the exact layer of interest.

“We use ‘slow’ muons, which have exactly the right velocity to reach the correct depth in the material. To achieve this, one first slows down the very fast muon almost to a standstill and then accelerates it to exactly the speed required before shooting it into the material. The muon then remains trapped there and decays into other particles”, explains Thomas Prokscha, who works on the experiment. From their flight direction, conclusions can be drawn about the magnetic processes in the material. All of this – production, slowing down, accelerating, and trapping in the material – has to occur within millionths of a second. To date, this method is only available at PSI. In total, there are only four sites worldwide where one can examine materials using muons. At PSI there are in total six experimental facilities for studying materials with muons, and each has its own special features. So, for example, one can use muons to study how materials change in the presence of strong magnetic fields or under the influence of high pressures.

Whilst materials scientists are interested in effects inside materials made of many protons, neutrons and electrons, particle physicists use muons to examine these building blocks themselves. For example, they have measured the size of the proton more precisely than anyone before, and have discovered it is smaller than previously assumed – causing a minor sensation. Aldo Antognini, one of the scientists involved explains: “In the experiment, we used hydrogen atoms, which normally consist of an electron and a proton, but replace the electron with a muon. This is then much more likely to come closer to the proton according to the laws of quantum mechanics, so that the properties of the ‘muonic atom’ are more strongly dependent on the precise structure of the proton.” Again, all of this has to take place within millionths of a second – both the creation of the muonic atom and its measurement. To achieve this, a special laser with a fast enough response time had to be developed and once again, as soon as the muon has decayed, one must immediately supply the next one, to ensure the required accuracy for the experiment is achieved. For this a large number of atoms have to be measured – and so every muon helps.

Muons at PSI are not merely a tool for experimenters but objects of important research in themselves. For example, when it comes to searching for the extremely rare decay of a positive muon into a positron and a ‘light particle’, a photon. A positron is the positively charged antimatter counterpart of the electron. This muon decay into a positron and a photon has so far never been observed. In its current form, the conventional theory used to describe the world of elementary particles – the Standard Model – predicts that one muon in 1050 (that is a 1 with 50 zeros after it) decays into a positron and a ‘light particle’. This cannot be measured – even if one were to run a realistic experiment over the entire lifetime of the universe, one would never see even one such decay. “Other theories predict a much higher probability of seeing this decay – one decay in 1012 or 1013. This can indeed be measured, but only at PSI”, explains Stefan Ritt, a member of the experimental team. “Even in this case, we would have to observe many muon decays to have a chance of detecting it, even once. However, if we were to observe it, it would be indicative of ‘New Physics’ – and the fact that a more accurate description of our world could lie in one of the new theories proposed as an extensions to the Standard Model.” So by examining the muon, we may not only learn more about the muon itself, but also about the fundamental nature and forces of our physical world.

Scientific information of the research labs and projects: