Our knowledge-based societies are dependent on modern technologies for the storage, exchange and processing of digital information. Advanced technology is needed to meet the ever-growing demand for increasingly fast and small devices such as computers, mobile phones and media players.

Nanotechnology and the field of spintronics are greatly contributing to this area, thanks in part to neutron scattering and muon spectroscopy. Spintronics refers to technologies that exploit both the spin of the electron and its charge. Most current devices such as amplifiers only utilise the charge of the electron. The discovery of giant magneto-resistance (GMR) was the first application of spintronics to nanotechnology and resulted in the Nobel prize for Physics in 2007. It has given rise to a new field of research and enabled important advances in wide ranging areas such as hard drive technology, magnetic-field sensors and transistors.

Spintronics is key to the next generation of digital devices.

By exploiting both the intrinsic spin of the electron in addition to its charge it will be possible to improve the energy efficiency, speed and memory storage density.

Many materials, which exhibit properties that are beneficial to the design of spintronic devices, are called “smart materials”. A smart material is a material that reacts to an external stimulus, such as stress, temperature, electric or magnetic fields by significantly changing one if its materials properties. For example smart glass can change its degree of transparency with the application of an electric field or magneto-resistive material change their electrical resistance in the presence of a magnetic field would be considered smart materials. 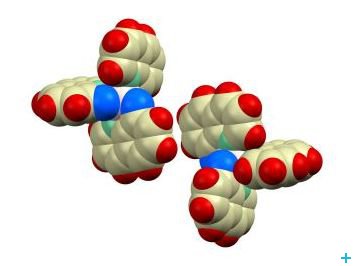 OLED The propellor-shaped molecules of Alq3, which are used as an active constituent of organic light emitting diode (OLED) displays.

Electronic devices based on organic semiconductors such as Alq3 (tris[8-hydroxy-quinoline] aluminum) are revolutionising display screens and large-area electronics. They are economically favourable, can be easily processed in large areas, their electronic properties are easy to tune, and they are simple to grow into high quality thin films.

Many aspects of charge transport in organic semiconductors remain poorly understood and making progress in this area is needed to use these materials to their fullest extent.

Muon spin relaxation studies at ISIS have been used to probe the charge carrier motion in Alq3 as a function of temperature. The charge mobilities obtained in this way are significantly larger than those obtained from direct transport measurements in polycrystalline films and thus provide an estimate for the intrinsic upper limit for the mobility that might be achievable in high quality bulk material.