This website is not being updated anymore. Please visit us at the SINE2020 website and keep up-to-date with the news posted on Neutronsources.org . 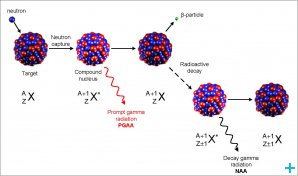 Neutron activation analysis (NAA) is a nuclear process used for determining the concentrations of elements in a vast amount of materials. NAA relies on excitation by neutrons so that the treated sample emits gamma-rays. It allows the precise identification and quantification of the elements, above all of the trace elements in the sample. NAA has applications in chemistry but also in other research fields, such as geology, archeology, medicine, environmental monitoring and even in the forensic science.

The method is based on neutron activation and therefore requires a source of neutrons. The sample is bombarded with neutrons, causing the elements to form radioactive isotopes. The radioactive emissions and radioactive decay paths for each element are well known. Using this information, it is possible to study spectra of the emissions of the radioactive sample, and determine the concentrations of the elements within it. A particular advantage of this technique is that it does not destroy the sample, and thus has been used for analysis of works of art and historical artifacts. 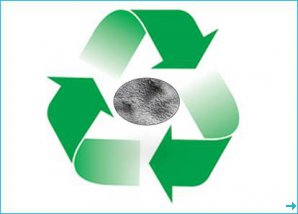 NAA was used to learn how to go from ash to eco-friendly solution for hazardous metals removal. Click to know more!

Neutron Activation Analysis is very sensitive and is therefore used to analyse for minor elements, which are present in very low concentrations. The method is especially useful for trace element analysis, e.g. in high-purity substances, and is therefore important in semiconductor techniques. It can also be used to detect trace element in water, biological material and minerals. In archaeology, NAA can give useful information about the origin of the findings according to the so-called “fingerprint” of the individual element composition in their raw materials. It is usually used as an important reference for other analysis methods.

NAA can detect up to 74 elements depending on the experimental procedure, with minimum detection limits ranging from 10-7 to 10-15g/g, depending on the elements and matrix materials. Some nuclei can capture a number of neutrons and remain relatively stable, not undergoing transmutation or decay for many months or even years. Different nuclei have different cross sections and half lives, and the intensities of the emitted gamma-rays can also vary – therefore the detection limits are quite variable. Rare earth elements (REE) have very high thermal neutron cross sections and NAA is usually the first choice for the determination of REEs in a trace elements analysis. 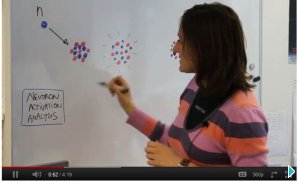 The NAA technique can be categorised according to whether gamma rays are measured during neutron irradiation (PGNAA also called PGAA) or at some time after the end of the irradiation after radioactive decay(s) (DGNAA or just NAA).

The PGAA technique is generally performed by using a beam of neutrons extracted through a reactor beam port. Fluxes on samples irradiated in beams are in the order of one million times lower than on samples inside a reactor but detectors can be placed very close to the sample compensating for much of the loss in sensitivity due to flux. The PGAA technique is most applicable to elements with extremely high neutron capture cross-sections (B, Cd, Sm, and Gd); elements which decay too rapidly to be measured by DGAA; elements that produce only stable isotopes (e.g. light elements); or elements with weak decay gamma-ray intensities. 2D, 3D-analysis of (main) elements distribution in the samples can be performed by PGAA.

DGNAA (sometimes called conventional NAA) is useful for the vast majority of elements that produce radioactive nuclides. The technique is flexible with respect to time such that the sensitivity for a long-lived radionuclide that suffers from an interference by a shorter-lived radionuclide can be improved by waiting for the short-lived radionuclide to decay or quite the contrary, the sensitivity for short-lived isotopes can be improved by reducing the time irradiation to minimize the interference of long-lived isotopes. This selectivity is a key advantage of DGNAA over other analytical methods.

PGAA can be found at: 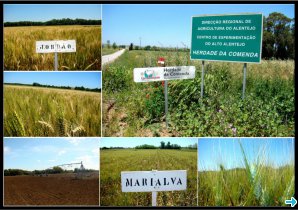 Healthy diet? Click on the image to know how INAA was used to quantify selenium in cereal crops.

With the use of automated sample handling (e.g. using rabbit system), gamma-ray measurement with solid-state detectors, and computerised data processing it is generally possible to simultaneously measure more than thirty elements in most sample types without chemical processing. The application of purely instrumental procedures is commonly called instrumental neutron activation analysis (INAA) and is one of NAA's most important advantages over other analytical techniques, especially in the multi-element analysis. If chemical separations are done to samples after irradiation to remove interferences or to concentrate the radioisotope of interest, the technique is called radiochemical neutron activation analysis (RNAA). The latter technique is performed infrequently due to its high labor cost.

INAA can be found at:

RNAA can be found at: